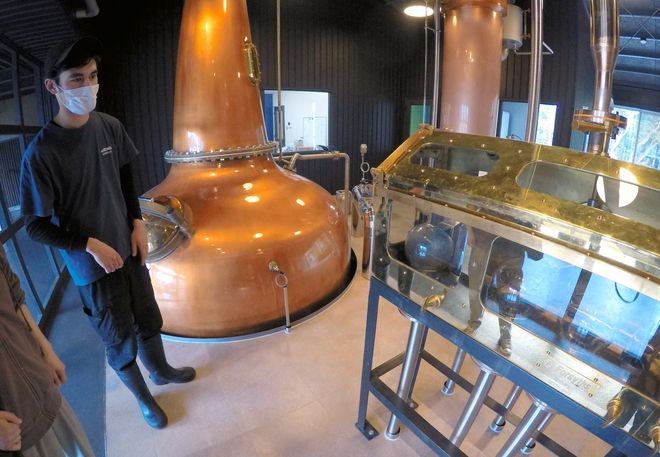 The first of the two distillation processes is being carried out to enhance the alcohol content and turn the beverage into gin at a facility of Kiuchi Brewery Inc. in Ishioka, Ibaraki Prefecture. (Naoki Shoji)

NAKA, Ibaraki Prefecture--A local brewery is on a mission to save craft beer from being discarded amid a draft beer sales slump brought on by the novel coronavirus pandemic.

Kiuchi Brewery Inc., based in Naka, Ibaraki Prefecture, is calling on restaurants across the country to send it barrels of their draft beer to turn into gin before it expires.

The company came up with the plan to save the suds after a sales representative heard a client in low spirits lamenting that they would likely have to pour out their product.

"We have no choice but to discard beer if things continue on like this,” the client said. “We will suffer a great deal of loss."

That’s why they ginned up the new service, called the "Save Beer Spirits" project.

"I, too, have been brewing beer, so it's a shame to see beer discarded," said Isamu Yoneda, 31, who is in charge of distillation at the brewery. "We want to help with what we can."

The brewery, known for its Hitachino Nest Beer line, has been accepting beer barrels containing at least 20 liters in total since mid-April. The company charges no fee for distilling and bottling, but applicants must shoulder the shipping fees.

The company has already received about 20 orders, not only from the Tokyo metropolitan area but also from Aichi and Okinawa prefectures.

Kiuchi Brewery has a distillation facility in Tokyo's Chiyoda Ward and another in Ishioka, also in Ibaraki Prefecture.

After receiving the beer, the brewery distills it in a pot still to enhance the alcohol content. The process adds a nutty flavor to the brew before it is turned into gin.

About 8 liters of gin can be produced from 100 liters of beer. The gin is filled into 750-milliliter bottles, which will then be labeled and returned to the senders starting in July.

Craft beer is produced at microbreweries and freshness is crucial.

Some connoisseurs say that some beers spoil quicker than others, with the taste and color starting to decline about a month after production.

"We hope that restaurants promote (the gin) as a main attraction to draw customers when they reopen," said Machiko Hagiya, who does public relations for the brewery.