Without vaccine for coronavirus, Tokyo Olympics in 2021 in doubt 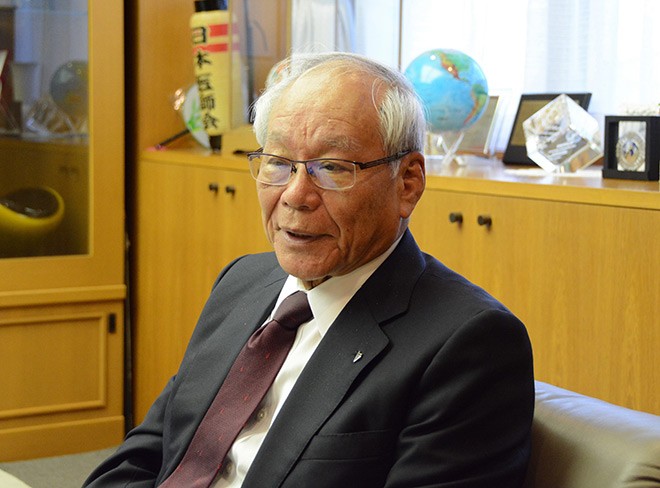 Yoshitake Yokokura, president of the Japan Medical Association, during an interview with The Asahi Shimbun on April 24 (Ryuichi Hisanaga)

The delayed Tokyo Olympics probably cannot be held in 2021 unless a vaccine is developed before then to defeat the global coronavirus pandemic, according to the head of the Japan Medical Association.

Yoshitake Yokokura, the JMA president, acknowledged that researchers around the world are striving to come up with an answer with anti-viral drugs as well as Avigan, a drug developed to treat a new type of influenza.

He also made clear that he felt that the government's steps to contain the virus fell short.

“Unless a vaccine is developed, I do not believe the Olympics can be held,” Yokokura told The Asahi Shimbun in an April 24 interview.

The decision to postpone the Tokyo Olympics from this summer was made in late March. The Olympic organizing committee re-scheduled the sports extravaganza for July 2021.

The JMA issued a statement about the crisis facing the medical system on April 1, nearly a week before Prime Minister Shinzo Abe’s declaration of a state of emergency for seven prefectures, including worst-hit Tokyo. The April 7 emergency declaration was subsequently extended to cover the entire nation and will remain in effect until at least May 6.

Yokokura noted that the move has had some effect, but said, “It would have been preferable if the declaration was issued earlier.”

“The government likely considered the social effects, but from the standpoint of the medical community we issued our declaration because we felt the situation would become unmanageable,” he said.

Although other JMA executives are part of a panel of experts advising the government on the coronavirus outbreak, Yokokura is not one of them.

The health ministry and the experts’ panel had issued guidelines about when individuals should consult or seek treatment for possible coronavirus infection. One guideline was to seek help when a fever of 37.5 degrees or more persisted for four or more days.

A subcommittee of the experts’ panel also posted a notice on the internet urging individuals to rest at home for four days even if they had a fever of more than 37.5 degrees, but with no pre-existing health condition.

Those guidelines were raked over the coals on social media sites in light of what happened to actor Kumiko Okae. After she developed a fever on April 3, Okae’s doctor suggested they observe her condition for four or five days. However, on April 6 her condition suddenly deteriorated and she was hospitalized. She tested positive for the coronavirus and was placed on a ventilator in an intensive care unit, but died early April 23 at age 63.

At a March news conference, JMA officials said that the directive did not mean to absolutely not consult with doctors unless symptoms continued for four days.

However, in the interview, Yokokura admitted that the guideline by his association may have led to misunderstanding and indicated a need to revise the message directed at the public.

The government’s panel of experts also revised its guideline on April 22 and suggested not waiting four days if an individual felt lethargic.