For nonregular workers, request to ‘stay home’ does not apply 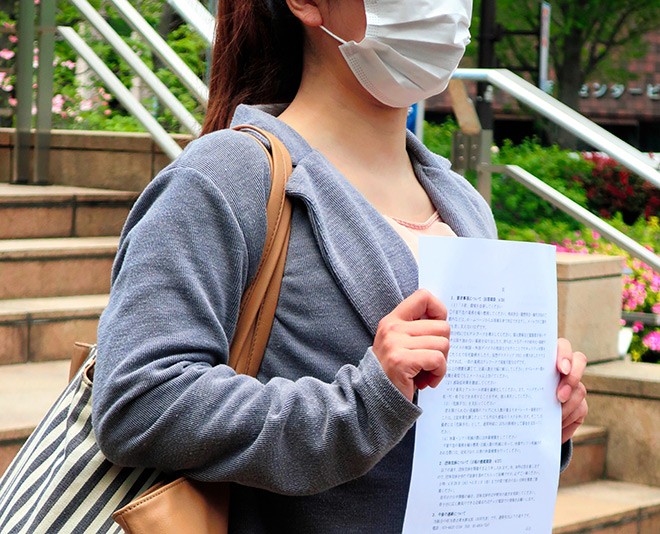 A temporary staff worker at KDDI Evolva Inc. asks the company to let her telework on April 24. (Mana Takahashi)

A pregnant woman in her 30s in the Tokyo area continued taking crowded trains to her workplace, where she stared longingly at the empty desks of her colleagues.

Those colleagues have been allowed to work from their homes during the novel coronavirus crisis because they are regular employees. But the woman is a temporary staff worker, and despite her pleas to the company, her staffing agency and even the government, she has been told to keep coming to work.

“I am unhappy with the treatment, but I cannot express my view forcefully,” said the woman, whose contract is renewed every three months. “I am worried that if I do, the company will terminate my contract.”

For many nonregular workers, such as part-timers and temporary workers, the government’s calls to “stay home” under the state of emergency do not appear to apply to them.

Many have asked local offices set up under the labor ministry to urge their employers to allow them to telework, but such requests have largely gone unchecked.

The pregnant woman who works in the center of Tokyo said her job can be done behind a desk with a personal computer.

However, she was told she cannot work from home because “we don’t have a necessary device available yet.”

Nonregular workers, long the most vulnerable in corporate layoffs and downsizing, are now being forced to choose between risking their health in the pandemic and earning a living.

“I have no other choice but to go to work at the office,” a nonregular worker said. “Otherwise, the company won’t pay me.”

As of April 16, nearly 4,000 people had consulted labor offices about paid vacation, which is not available to many temporary and nonregular workers and subcontractors.

To avoid the trains, the pregnant woman used up all her paid vacation days. From early April, she felt compelled to miss work to protect the health of herself and her unborn baby.

The temp staff agency denied her request to receive part of her pay as compensation, saying her work absence was decided “on her own.”

A temporary staff worker who works at KDDI Evolva Inc., a call center subsidiary of KDDI Corp., said she asked the company on April 24 to let her work from home. She also requested collective bargaining via the General Support Union.

Her job requires her to sit in a room with windows that won’t open in a high-rise building and handle incoming calls seeking information.

About 100 co-workers use the same room and sit within arm’s reach of each other, she said. They share computers and headsets.

Her boss said teleworking is not an option for workers like her: “We are handling personal information.”

The company renews her contract once every several months. If she misses 10 percent of the hours that she is expected to work under the contract, the company will lower her hourly wage.

“I go to work, putting myself at risk of exposure to the virus. If I don’t go, I will face pay cut. I just want a safe working environment,” she said.

A representative of KDDI Evolva said, “We will ask our clients to downsize their business to secure employees’ health and safety.”

A woman in her 30s, who lives in Osaka Prefecture and does clerical work as a temporary employee at a major company, says she was disappointed not only with her employer but also the government.

Teleworking is only available for regular employees, her temp staff agency told her.

She complained to the Osaka Labor Bureau and was told: “Ask the temp agency. It’s a major company. They should have a consultation window.”

After she did, the temp agency consultant asked her, “Are you saying you want to take time off from work?”

The woman stuck to her original position and again asked if she could work from home.

“If you miss work, it will be reflected in your contract, and it may not be renewed,” the consultant told her.

“It’s on me that I chose this way of working, I suppose. But this is a matter of life and death. I don’t know if I deserve to be treated so crudely like this,” the woman lamented.

“My workplace is packed with people,” one caller said. “Only my boss gets to work from home.”

The government has urged business associations and companies to “replace intra-office work with teleworking in principle” to minimize the risk of infection, but the decision is left entirely up to each employer.

According to a recent survey conducted by the powerful Keidanren business group, 97.8 percent of leading companies have already introduced a teleworking system.

But the ratio of employees who are actually working from home is a different story.

Even among businesses in which remote work is considered easy to implement, statistics estimate that about 66 percent of employees are actually able to work from home.

Small and medium-sized companies lack the manpower and cannot afford to spend extra money to buy devices for teleworking.

Many workers whose jobs are deemed essential in the pandemic, such as retail staff, people dealing in logistics and caregivers, are also nonregular employees.

According to a nationwide survey conducted by Persol Research and Consulting Co., a leading human resources service business, 27.9 percent of regular employees and 17 percent of nonregular employees worked from home during the period from April 10 to 12.

“There are many workplaces and clients who lack a sense of crisis,” a company representative said. “They are capable of letting workers telework under ordinary circumstances. Yet, they are lumbering.”

A labor ministry official insisted that the ministry has no authority to force companies to shift to teleworking.

The ministry, therefore, is unwilling to investigate complaints from workers, and it will not urge companies to improve working conditions based on these claims, the official said.

Ichiro Natsume, a lawyer who belongs to the Labor Lawyers Association of Japan, said: “The government should take up each case and encourage companies to make improvements. Otherwise, workers in vulnerable positions will continue to be forced to go to work.”

The government has announced economic measures to relieve the burden of small and mid-sized companies that are adjusting to the new normal and introducing teleworking. Two-thirds of the costs, or up to 4.5 million yen ($42,000), of renting computers and cameras will be covered, for instance.

But the government will not subsidize purchased devices, fearing that some companies might resell them.

The economy ministry will start accepting applications from businesses in early May. The application process is expected to take some time, and the companies will not receive funds until June, according to the ministry.

(This article was written by Hisashi Naito, Mana Takahashi and Ayumi Shintaku.)