'Doraemon' collector's edition made to last into the next century 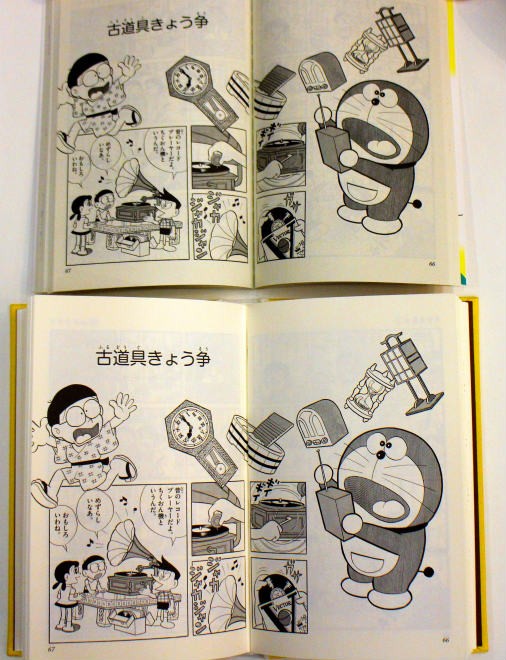 Compared to the regular edition published from the Tentomushi Comics imprint, above, the deluxe "100-year Doraemon" edition is bound with the "kagari-toji" book binding technique used for art books so the comic can be opened flat. (Yusuke Kato)

The "100-Year Doraemon" set is priced at a whopping 77,000 yen ($716), including tax, but the comic books are made using special treatments so the deluxe edition will last into the next century--when the time-traveling robotic cat will be born.

"We don't know whether there will be paper-based manga 100 years from now, but we want 'Doraemon' to be read by future generations," said Masaki Tokuyama, editor in chief of the Shogakukan Doraemon Room. "We made completely sure that it would be luxurious and robust."

Published using the Tentomushi Comics imprint, 88 million copies of the popular “Doraemon” manga have been sold in Japan alone. The first volume, released in 1974, had 251 print runs.

All the special volumes come in hardback, with the front cover made of a cloth material less prone to degradation than paper. The comic books are bound using the "kagari-toji" technique, which is used to make art books highly durable, allowing the double-spread pages to open flat.

The pages are made of a high-quality paper that is less susceptible to deterioration over time from ultraviolet light. The deluxe manga is also made using the "tenkin" technique, where gold leaves are pasted to the top edge of pages to keep the comics dry.

The company also said it is using a high-precision printing process and high-end inks to re-create the manga's drawings more faithfully.

The deluxe set will be bundled with extra perks, including a special art book, a complete index of secret gadgets and characters from the manga series, and a "Time Furoshiki"-themed wrapping cloth to wrap the volumes.

A "Dokodemo Door" (anywhere door)-shaped bookshelf will be available exclusively to people who buy the "100-Year Doraemon" set, but the price for that has yet to be determined.

The company said it is now accepting reservations for the collector's edition, of which it is only producing a limited number of copies. But it said it will fulfill all orders made by Aug. 31.

The manga books are scheduled to be shipped in December.

As part of the 50th anniversary, the “Vol. 0” book, which contains all six versions of the first "Doraemon" episode, was published in 2019, becoming a best-seller at 600,000 copies. According to Shogakukan, more than 60 percent of purchasers were over 50.