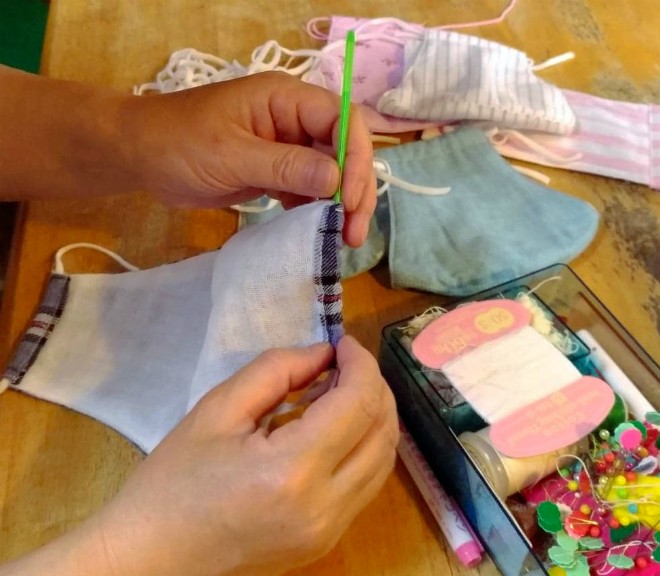 A woman in Kanagawa Prefecture makes a mask while her children are asleep. (Provided by a woman)

For many men in Japan, the national “stay home” campaign during the COVID-19 pandemic offers a chance to practice the guitar, binge-watch TV dramas and lounge around.

But for many Japanese women, particularly working mothers, their already disproportionate burden of doing housework has worsened.

They say they have no time to leisurely sip tea, read books or pet their dogs like Prime Minister Shinzo Abe did in his highly criticized video posted on social media.

Receiving little help from family members and angered by media coverage during the pandemic, many women are feeling neglected and are on the verge of breakdowns, experts say.

Abe’s self-isolation video in early April drew criticism as being out of touch with common people.

Scenes of Japan shown by the news media during the state of emergency have also drawn fire.

A 52-year-old woman in Kanagawa Prefecture said she was infuriated by the media’s overwhelming coverage of congested supermarkets, high risk areas for virus infections.

She felt like the shoppers, mostly women, were being put in a bad light.

“It’s not like we love grocery shopping. None of us do,” she lamented.

The woman teaches at a university but has switched to remote work and now goes to the campus only once a week.

With their schools shut down, her two children, a 13-year-old daughter and 10-year-old son, have been staying at home since March.

Her husband, 49, is an employee at a social welfare facility and still goes to work as usual. But as the outbreak has affected the food service sector.

That means more grocery shopping for his wife, in terms of both quantity and frequency. She prepares three meals a day for the family.

There appears no end to the increase in her household chores.

In late March, an email sent from her son’s elementary school asked parents to follow health protocols ahead of the expected school opening in April, such as checking children’s temperatures and ensuring they are wearing masks when they arrive at school.

A note at the end of the email made the mother’s blood boil.

She clicked the attached hyperlink, which opened a page set up by the education ministry titled, “I want to make a mask!”

It is one of the ministry’s “challenges” for students during the school closures. Under the title, “What we can do to prevent the novel coronavirus from spreading,” many activities are featured with videos and illustrations.

Another link led to a page titled, “Let’s sew a mask by hands.”

The school’s intention was to encourage children and parents to help alleviate the shortage of masks in Japan.

But the woman was enraged because she felt that the government and the school were thrusting another responsibility on her: “Are they saying that I need to do this, too? Seriously?”

She chose to telework because she was told to refrain from sending children to after-school care programs. She was also against the idea of leaving them at home by themselves.

However, she found that working from home was much more difficult than she thought.

In between work, she has to watch over her children while they study and has to plan and clean when they cook or make crafts.

TV newscasts have added to her frustration, especially when they show mothers looking so kind, caring and stress-free while watching their children study hard at home.

“When schools assign homework or a quiz, they don’t expect children to solve it on their own. Parents are expected to grade them,” she said. “In the same way, the mask making was thrust upon me in the name of ‘a learning opportunity for kids and parents.’

“Who do they think will do the actual work of making a mask?”

MORE WORK WITH HUSBANDS AROUND

In many cases, husbands do not help out at home and instead are creating more work for their wives.

A 47-year-old woman who works as a business consultant and lives in an apartment in central Tokyo has lost 30 percent of her income since late February. That was when she decided to stop sending her 4-year-old daughter to nursery school to protect her from the virus and started working from home.

She said she is now overloaded with household work, including laundry and preparing meals and snacks. Her daughter is also stressed out and began wetting her bed and having difficulties falling asleep.

Her husband, 40, bikes to work instead of riding a train. But his new routine wears him out so he can offer little help at home.

Every time he comes home, he takes off his business suit at the entrance. She then picks up his clothes, sprays them with sanitizer on the balcony, and lets them hang for three hours until dry.

Doctors and experts on women and family issues said there has been a rise in reported cases of mothers developing psychogenic disease symptoms.

Naomi Ono, who heads the Megumi Clinic Meguro in Tokyo’s Shinagawa Ward, said she has seen more women feeling unwell apparently from the stress in caring for their children and husbands at home in the pandemic.

She began noticing the trend around late March.

Many of the patients, mostly in their 30s and 40s, initially complained about pains in their shoulders, chest and arms. Some had palpitations and felt queasy.

Once the doctor started asking more questions and letting them talk about deeper issues, the patients revealed that they were overburdened with household tasks and overwhelmed by a sense of loneliness.

These women are holding their ground at the edge every day, Ono said.

The general mood in Japanese society is that “a family issue should be kept and resolved within the family.”

“But the pandemic has kept people in their homes, and no one is free from stress now,” Ono said.

Emiko Ochiai, a sociology professor at Kyoto University who specializes in family relations and gender issues in Japan, expresses skepticism toward the “stay home” slogan.

“It’s not that easy to stay home,” she said.

Shutting down schools and promoting telework may be music to the ears of some, and such measures are indeed needed to contain the public health crisis.

But who does the shopping, cooking, feeding and cleaning to make the “stay home” campaign viable?

Not enough attention is being paid to the women who are the driving force in the battle against the virus, Ochiai said.

Ochiai joined Nanami Suzuki, a graduate student at Ochanomizu University, to conduct an online survey from April 8 to 15 on the impact of the pandemic on household chores.

A total of 340 people, both men and women, responded to the questionnaire. Either the respondents themselves or a family member had worked from home during the outbreak.

Thirty percent of respondents said they felt “the volume of household tasks increased.”

The more meals they ate at home, the more times they had to shop for groceries, many of the respondents said.

Among mothers, 37 percent said they were increasingly burdened with household chores and child care work. The ratio was 44 percent for women whose children’s schools were shut down.

Many mothers said their family relations had worsened during the pandemic.

Ochiai pointed out that “unpaid household work” carried out mostly by women has not even come up for discussion for the government’s economic compensation measures to deal with the outbreak.

Ochiai says local governments have many options available to help ease the burden on women, especially working mothers, such as delivering to households boxed lunches of food that was initially intended for school lunches.

“The government has a public responsibility to help these women, who are breaking their backs doing household tasks, before they collapse,” she said.