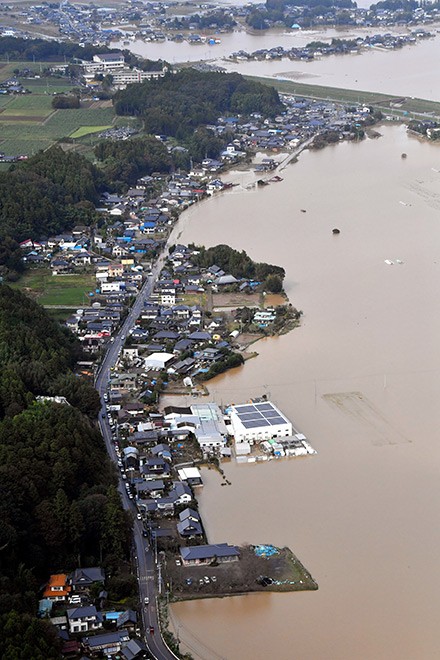 The Nakagawa river in Mito, Ibaraki Prefecture, floods after Typhoon No. 19 swept through the area in October 2019. (Asahi Shimbun file photo)

Torrential rains that trigger widespread flooding around this time of year could cause havoc to medical institutions designated for special infectious diseases such as COVID-19, but if a once-in-a-millennium event occurs the results could be catastrophic, according to a study.

A research team at Kyoto University’s Disaster Prevention Research Institute warned that about one-third of the 372 facilities around the nation could be submerged, some by as much as 10 meters of water.

“We need to prepare for a natural disaster such as widespread flooding that could strike during the pandemic, before the start of the season when many floods occur,” said a team member referring to the results of the study released April 27.

The specialist medical institutions, which operate under the infectious disease law, are equipped with sick rooms with special equipment dedicated to the treatment of diseases such as COVID-19 and have doctors experienced in providing such treatment.

The projections of flooding at the 372 institutions caused by rivers overflowing their banks were made on the basis of local hazard maps drawn up by the Geospatial Information Authority of Japan and other material.

The result showed that 95, or around one-quarter of the institutions, could be submerged in flooding that is predicted to occur once in 100 or 200 years. Of them, 50 were estimated to expect flooding to a depth of 2 to 3 meters or deeper.

In the largest-scale flooding that is projected to occur once in 1,000 years, 125, or about one-third, could be inundated, according to the study. Of them, 99 were estimated to expect flooding of 2 to 3 meters or deeper, with some facing water around 10 meters deep.

Many hospitals across the nation flooded after Typhoon No. 19 tore through northeastern Japan last October, leaving around 100 people dead or missing.

“It will likely be difficult for hospitals that treat patients with special infectious diseases to evacuate their patients and staff (in such an event),” the team member said, adding that the suspension of those services due to flooding could lead to a public health crisis.

“I urge each hospital to take measures, such as checking potential routes where flooded water may flow, and installing in-house power generators on an upper floor of the building to prepare for power blackouts,” said Tetsuya Sumi, a professor of river engineering at the university.