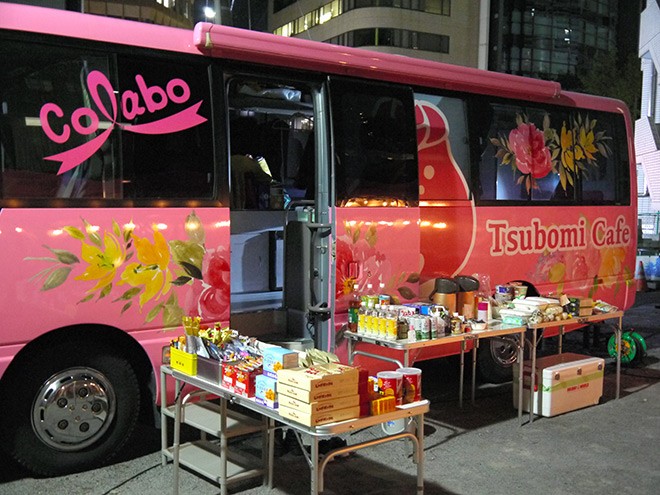 Tsubomi Cafe, a free and safe space for teenage girls, seen in Tokyo’s Shibuya district in April. A pink-colored bus, alongside tents, tables and chairs, is set up to provide food, clothing and sheltering. (Asahi Shimbun file photo)

A group of sexual abuse survivors is making allegations of patronizing, sexist behavior and harassment related to a recent visit from a group of politicians that included Diet members, including a former education minister.

A support group for the teenage girls on April 24 published a 10-page statement on its website detailing the visit, outlining the allegations and asking the politicians to explain their behavior. But the former Cabinet minister is denying that any harassment took place.

Colabo, an association that provides food, clothing and shelter to poverty-stricken and sexually abused teenage girls, was contacted by Toshiko Abe, a Lower House member of the ruling Liberal Democratic Party and former vice minister for foreign affairs, on April 21.

Abe wanted to tour a site the group operates in Tokyo with her fellow lawmakers, according to Colabo.

The staff accepted Abe’s request in hopes the lawmakers would learn about the problems the teens face, which are now being aggravated by the coronavirus pandemic.

Staff gave them permission with one condition: “Up to five people only.”

“I think it will be about three or four of us,” Abe said over the phone, according to the statement.

The following day, Abe showed up at Tsubomi Cafe, a renovated bus turned into a free and safe space created exclusively for at-risk girls in Tokyo’s Shinjuku Ward.

Despite the staff’s plea, about 15 people showed up.

Most of them are members of the “LDP housing-first study group,” chaired by Hiroshi Hase, a Lower House member and former education minister.

They were all males, except Abe, according to the statement.

Hase and others participated in setting up the cafe.

The girls and women working at the site the day had been sexually abused by men and are still dealing with that trauma.

Some of them stopped working after hearing an aggressive tone of voice used by Hase and others in the group, staff said.

A man with a camera in the group started taking pictures of girls without asking permission.

Some of the girls had fled from abusers and their whereabouts have to be kept secret.

The group later posted these pictures on social media without getting their consent.

“We supported and helped teen girls,” read another.

Colabo staff later expressed shock in learning the visit was billed as “volunteer work,” and said they felt their “cafe was used” for the politicians’ self-promotion.

Hase, a former professional wrestler, was seen refusing to let the teens and women move heavy items--in one instance, a tent.

“Because you’re a girl,” he said to one, according to staff.

He then ordered younger lawmakers to take over the task.

Yumeno Nito, who heads Colabo, said she was troubled by the politicians’ condescending behavior.

“This is a movement for ourselves by ourselves, and that is very important to us. We always divide up tasks and each takes charge of a part,” Nito explained.

She said they felt looked down upon.

“I felt that, in their minds, women are powerless and have to be protected,” said Nito. “They should really think over and understand why their overbearing behavior is problematic.”

Colabo published a statement on its website on April 24 protesting the behavior and, among the allegations, claimed that Hase had sexually harassed an underage girl.

Hase touched the girl’s waist with both his hands when she was working to set up a tent, according to the statement.

The girl, in shock, immediately ran and reported the incident to the other girls and staff, the statement said.

Hase apologized for making them feel uncomfortable but denied the harassment allegation.

“I am sorry for causing (them) discomfort,” Hase wrote on April 25 on his official website.

“We were moving around in a confined space. I have no memory of putting my hands on (her) waist or not. If I did, I am very sorry.”

Colabo staff said they have not heard from Hase since the visit.

Hase has not responded to an interview request from The Asahi Shimbun, as of April 27.

“The cafe is a safe space for girls and women who are victims of violence. Hase and others are so way out of touch with their behavior and so irresponsible,” a Colabo representative said.