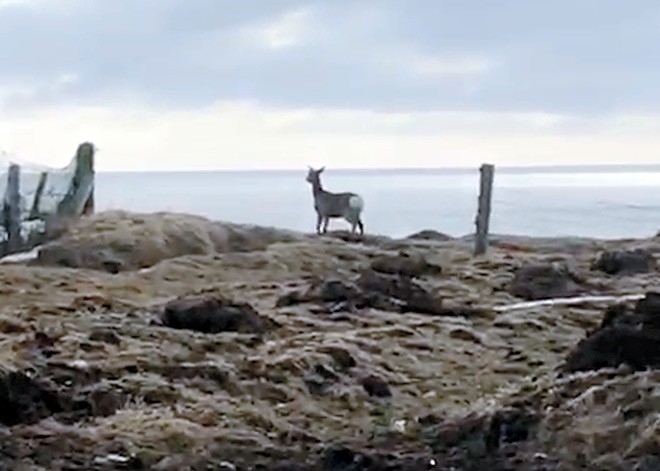 A female Hokkaido sika deer is sighted along the coast of Kunashiri Island on April 12, 2019. (Photo by Andrei Polyushkevich)

The migration of animals throughout history is amply illustrated by the arrival of a subspecies of deer native to Hokkaido in Kunashiri Island, part of the Northern Territories that were seized by the Soviet Union at the end of World War II but are claimed by Japan.

Researchers from Hokkaido University and other institutions noted that Hokkaido sika deer (Cervus nippon yesoensis) have been observed in Kunashiri Island since 2017 and assumed they either swam across the Nemuro Strait, a distance of less than 20 kilometers, or hitched a ride on ice floes.

It is widely thought that Hokkaido is the only habitat of the subspecies of sika deer, but the researchers said the sightings, along with droppings and hoof prints, suggest that the animals have settled on the island.

Hunting and other factors once brought Hokkaido sika deer to the edge of extinction, but their population numbers rebounded due to preservation efforts and a high fertility rate.

Hokkaido sika deer numbers have since multiplied rapidly and their voracious appetite for plants is causing serious concern in Shiretoko, a UNESCO World Natural Heritage site, and elsewhere.

In September 2019, researchers visited the Northern Territories off the eastern coast of Hokkaido, Japan's northernmost main island, as part of a Japan-Russia expert exchange program.

The records showed that fresh droppings and hoof prints have been spotted continually on Kunashiri Island since 2017, although permanent habitation of Hokkaido sika deer had not previously been established in the Northern Territories.

Two females were sighted simultaneously in 2018, which means at least two individuals of the subspecies have likely settled on Kunashiri Island, the scholars said.

“The deer crossed the strait walking on ice floes in winter or swam across it in summer, but details of routes they traveled remain unknown,” said Satoshi Ohdachi, an assistant professor of animal ecology with Hokkaido University’s Institute of Low Temperature Science, who was on the study team.

As the deer population mushroomed in Hokkaido, some spillover individuals may have crossed the sea in search of food, but why they settled in the Northern Territories in 2017 and later awaits more detailed analysis, he added.

Kunashiri Island, with only about one-50th the land mass of Hokkaido, is home to precious plant species.

“Japan and Russia should set aside political motives and work together in monitoring and fact-finding studies to prevent a population surge of Hokkaido sika deer, which could do harm to the local vegetation,” Ohdachi said.

The research results were published in a paper carried in the online edition of an international scientific journal of the Mammal Society of Japan. The paper can be accessed at (https://doi.org/10.3106/ms2020-0008).