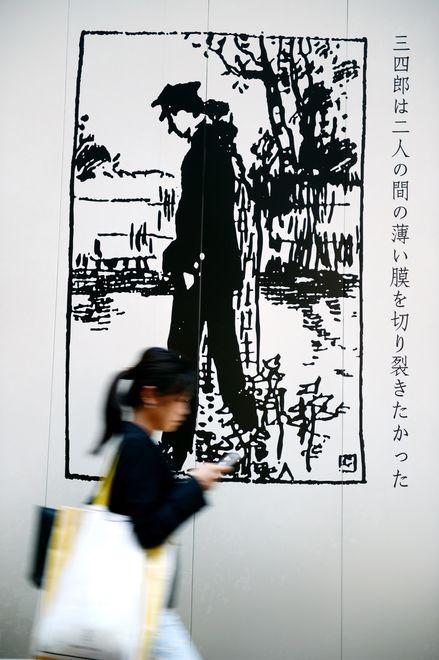 In this June 22, 2015, file photo, a wall painting shows an illustration for the novel "Sanshiro" by Natsume Soseki published serially in The Asahi Shimbun. (Takayuki Kakuno)

My heartbeat quickens every time I read the opening scene of the novel "Sanshiro" by Natsume Soseki (1867-1916).

The eponymous protagonist, Sanshiro, becomes acquainted with a woman while traveling by train to Tokyo, where he will be enrolling at the University of Tokyo.

By chance, they end up not only staying at the same guest house, but in the same room.

The room comes with a tasteful mosquito net for use at nighttime. But since only one net is provided, Sanshiro vacillates over whether to share it with the woman.

Obviously, the season is summer. And that's because during the Meiji Era (1868-1912), universities in Japan imitated their Western counterparts, and the scholastic year started in September.

The novel contains a scene where Sanshiro, having started attending the university, admires a street lined with ginkgo trees.

Given this literary flourish, coupled with current nationwide school closures due to the novel coronavirus pandemic, changing the start of the scholastic year to September for all schools in Japan is not too far fetched a proposition.

In fact, a senior high school pupil started such a petition and gained a substantial following on social media, arguing that since the quality of online classes varied from school to school, this spelled an obvious disadvantage for some students preparing for university entrance exams.

Calls for starting the academic year in September are not new.

Advocates point out a number of benefits, among them that entrance tests will no longer be at the mercy of inclement winter weather--heavy snow, for instance--and that the switch will facilitate matters for students wishing to study abroad.

I believe the proposal deserves serious examination while keeping close tabs on the spread of COVID-19.

The English expression "game changer" is defined as "an event, idea, or procedure that effects a significant shift in the current manner of doing or thinking about something."

The COVID-19 crisis may well be that.

If the change is bound to affect society, we must ensure that it will be for the better. Open discussions are needed in many areas, not limited to matters related to the school system.

Historically, it was the former Imperial Japanese Army's conscription system that reset the start of the academic year from September to April.

When the season to register eligible persons for military service was changed from September to April, many schools began to shift the school enrollment schedule to April to give students the qualified status to dodge the draft.

Sometimes, it takes an "external jolt" to overhaul an established system.