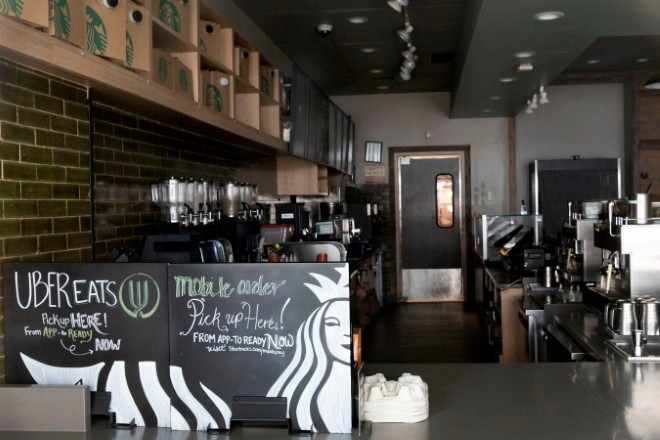 A Starbucks coffee shop in the Brooklyn borough of New York is closed during the COVID-19 coronavirus outbreak March 19. (AP file photo)

Starbucks said Tuesday that its global sales tumbled in the first three months of the year as coronavirus-related shutdowns gripped its operations.

The Seattle-based coffee giant said conditions will likely worsen in the current quarter before moderating later this summer, and its recovery will extend into 2021. But executives also said they are seeing encouraging signs.

Starbucks said its same-store sales--or sales at stores open at least a year--fell 10 percent globally in the January-March period. More than 75 percent of its stores in Japan, the United Kingdom and Canada are closed.

Starbucks said 98 percent of its stores in China have reopened, but many are operating with reduced hours and seating. In April, same-store sales were down 35 percent in China. But that was a big improvement from the 90 percent declines the company was seeing in February.

Johnson said Starbucks is predicting a “substantial recovery” in China by Sept. 30, when its fiscal year ends. China is Starbucks’ second-largest market, with around 4,100 stores.

In the United States, Starbucks has temporarily closed half its 8,000 company-owned stores. It’s planning to reopen 90 percent of those with modifications by early June. Some locations will offer drive-thru and delivery, while others will establish contact-less pickup options, Chief Operating Officer Roz Brewer said.

Thirty stores reopening next week will have their cafes open, but seating won’t be provided, Brewer said. She said Starbucks will consider local government restrictions, infection curves and other measures as it reopens stores.

Starbucks has spent heavily to help employees navigate the crisis. The company has committed to paying all U.S. and Canadian employees through May 3 whether they’re working or not, and those who do come to work are making a premium of $3 per hour. Starbucks has also provided 1 million free coffees to frontline health and safety workers. The company said that spending will peak in the April-June period.

Starbucks’ revenue fell 5 percent to $6 billion (639 billion yen) in its fiscal second quarter. That beat analysts’ estimate of $5.9 billion, according to FactSet.

The company earned $328.4 million for the quarter, down 50.5 percent from the prior year. Adjusted earnings of 32 cents per share were shy of analysts’ estimate of 34 cents. Starbucks’ same-store sales decline was also higher than analysts anticipated.