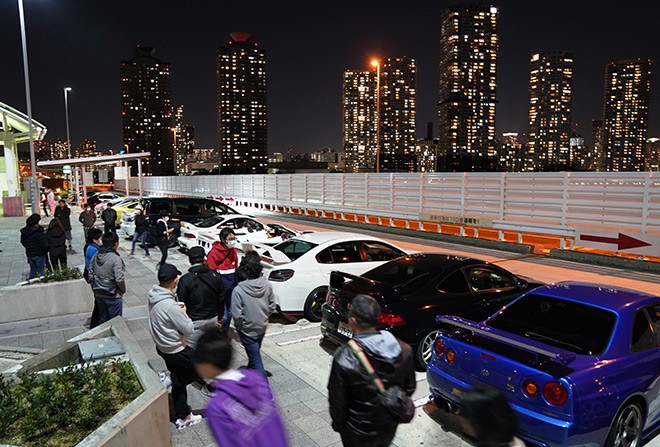 Cars and spectators overflow at the Metropolitan Expressway’s Tatsumi No. 1 Parking Area in Tokyo’s Koto Ward on April 25. (Ryo Kato)

The "Roulette Gang" is back in town, preying on empty expressways in Tokyo after dark when few motorists venture out due to the COVID-19 pandemic.

Driving vehicles with souped up engines, they race around the loop Metropolitan Expressway network at way past the speed limit, generally being a nuisance and daring the police to catch them.

The “Roulette Gang” is a coined generic term for reckless drivers who race on loop-shaped highway roads, mainly in Tokyo and Osaka. They got their nickname from the look of their cars circling roads, like a spinning roulette wheel.

These illegal racers first came to national prominence around 1990, but their numbers had waned--until now.

These fast and furious wannabies sprang back to life courtesy of the deadly virus crisis that left them with too much time on their hands after the government declared a state of emergency for Tokyo and six other prefectures on April 7.

And not surprisingly, spectators flock to rest stops to watch the cars race through the center of the capital night after night, prompting Tokyo police to pull out the stops to crack down on drivers racing on full beam.

Tokyo Governor Yuriko Koike's call for “Stay Home Week” during the period from April 25 to May 6 that overlaps the national Golden Week holidays amounted to an open invitation to make the deserted expressway network the private playground of the Roulette Gang.

The Metropolitan Expressway’s Tatsumi No. 1 Parking Area in Tokyo’s Koto Ward was overflowing with modified cars around 9 p.m. on April 25. With parking spaces for less than 50 cars, 70 or so vehicles squeezed in.

The constant flow of sports cars coming and going was accompanied by the sounds of muffled engines ready to be floored. License plates were from various prefectures in the Kanto region as well as Tokyo.

As drivers gathered and chatted in the parking area, a 27-year-old man from Saitama said he came to race with five or so other drivers. They compete to see who can drive the fastest on a single lap of the expressway.

“It’s much easier now with no traffic,” said the man, the owner of an Aston Martin with a top speed of 200 kph.

The maximum speed limit on loop roads on the Metropolitan Expressway is set at between 50 and 60 kph.

A 22-year-old university student from Wako, Saitama Prefecture, came to see the illegal race with his girlfriend.

With no classes to attend due to the pandemic and unable to work part-time jobs or join his buddies in drinking parties, it amounted to a night out.

“I think I’m going to go crazy,” he said. “I have too much free time. And I don’t know what to do with it except driving.”

Traffic volume on the Metropolitan Expressway has been on a downward trend since the state of emergency was declared in Tokyo and six other prefectures, according to the Ministry of Land, Infrastructure, Transport and Tourism.

After the state of emergency was extended nationwide on April 25, traffic volume plummeted to 60 percent of the corresponding period a year ago.

This was great news for the Roulette Gang.

A dozen or so police cars converged on the Tatsumi parking lot around 9:30 p.m. to repeatedly announce the area would be shut down soon.

Officers steered vehicles from the freeway into the parking area, checked cars to detect flaws and illegal modifications on engine mufflers and side-marker lights, among other parts.

They busted 17 drivers, including one who did not have a license.

Police also set up portable speed traps and detected eight speeding offenses, which will be investigated.

Police said they received 15 complaints about noise, an unusually high number, from people living near the parking area.

A Tokyo Metropolitan Police Department representative urged drivers and spectators to “stay home as much as possible to prevent the further spread of virus.”

(This article was written by Eishi Kado and Yuko Kawasaki.)