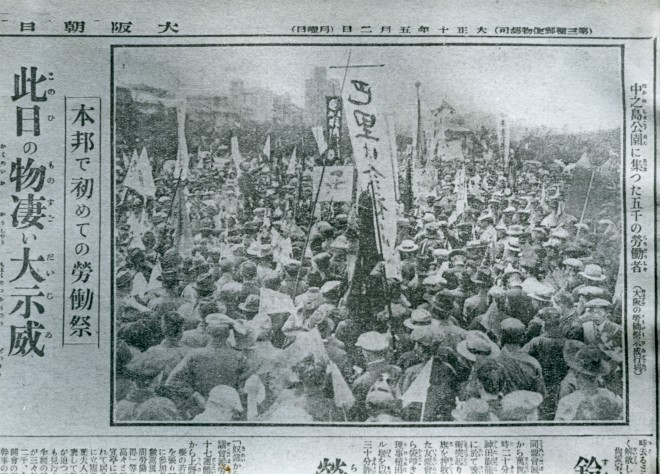 A May 1, 1921, photo in the Osaka Asahi Shimbun shows a gathering of workers at a May Day event. (Asahi Shimbun file photo)

May Day rallies, as we know them, originated in the United States.

In Japan, May Day rallies were first held in 1920, exactly 100 years ago. But the annual tradition remained outlawed for 10 unfortunate years starting in 1936, the year of the failed coup d'etat attempt of Feb. 26--popularly referred to as the 2.26 Incident.

Government crackdowns on social movements were growing in severity back then, according to contemporary newspaper reports.

Wary of May Day rallies being disguised as picnics, authorities outlawed them, irrespective of the crowd size.

Although the government continued to give a tacit nod of approval to tea parties and roundtable discussions (organized by labor leaders), anything that suggested a May Day gathering was banned outright. This continued into and throughout the World War II years.

The first postwar May Day was celebrated in 1946.

And now, even though the nation is neither at war nor under an overtly repressive regime, there will be no May Day rally this year.

Even though the video was titled "May Day 2020," it saddened me to see senior Rengo officials talking to the camera.

Desperate workers are calling hotlines around the nation, and The Asahi Shimbun's Akita Prefecture edition recently ran some of their comments.

"I was hired by a company, but got fired immediately because the company couldn't be certain about its own future," lamented one caller.

Another complained, "(The company) isn't compensating me for the days I was forced to take off."

There is also the problem of excessive burdens being placed on health care workers and retailers.

Now is exactly the time when workers really need help from labor activists.

But the latter are being hindered from holding rallies and collective bargaining because engaging in such activities would be tantamount to spreading infections.

How far can the internet go in substituting for in-person assistance to protect the rights of workers?

This spring is unprecedented in the century-old history of May Day in Japan.