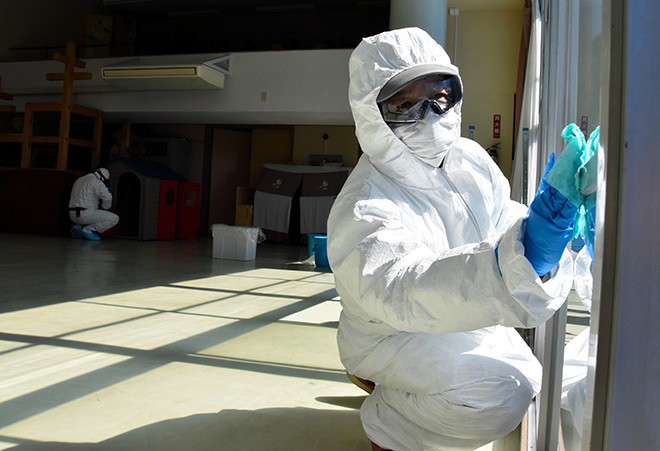 The novel coronavirus crisis seems to be bringing out the worst in certain people.

Privacy rights and simple manners have been cast aside in communities gripped with fear about the contagion.

Patients and their families are being further victimized by demands for additional information. And even those with an indirect connection to a confirmed infection case are facing harassment, bullying and threats.

In early March, for example, the positive test of an elementary school boy in a rural farming village on the island of Shikoku turned the community upside down.

The boy and others who had come in close contact with a relative who had been infected were tested for the coronavirus.

Around that time, there were only about 300 confirmed cases in all of Japan.

The village and the prefectural government discussed what information should be released to prevent confusion and uncertainty in the community while protecting the privacy of the infected child.

The boy’s guardian agreed to the disclosure of the school name as long as the pupil’s privacy was protected.

At a news conference the same day, the prefectural governor withheld the boy’s name but divulged the names of the village government and the school. The governor also said the patient was under 10 years old.

That was not enough for many of the villagers.

Parents of students at the school wanted to know the grade the boy was in to ease their fears.

Phone calls flooded the village government and the public health office that oversaw the case.

While some callers sincerely voiced their concerns, others aggressively demanded the name and address of the infected child.

When an office worker said such personal information could not be released, one caller shouted, “Quit your job!”

A farmer walking in the village told an Asahi Shimbun reporter while pointing in the direction of a hamlet, “I heard the rumor that it was the son of that home.”

The farmer said an acquaintance had called and asked, “I heard it was someone from that district, but do you know who it is?”

Local government officials said the boy’s identity was somehow discovered, and that he and his family ended up being harassed by phone calls about the infection.

A local government official said, “This is a small village where everyone knows each other.”

Just one week after the boy’s infection was revealed, the village mayor asked the prefectural government to hold a meeting regarding the negative effects from the announcement.

Officials at that meeting issued a statement that said, “It is very regrettable that the infected individual and others became victims of negative publicity because of community fears.”

The village mayor said he was stunned by the behavior of some of the residents.

“I never expected the uproar would cause people to spew out such words that they normally would never say,” the mayor said.

Infected people have been the targets of bullying, but local criticism has also been directed at their employers, schools or institutions.

After a coronavirus cluster infection was reported at Kyoto Sangyo University because students had held a drinking party, the university received threatening phone calls.

One caller said, “I will set fire to the university.”

In Nagoya, a day care center refused to accept the child of a nurse at a hospital that was treating coronavirus patients.

On March 14, a professor in her 70s at Koriyama Women’s University in Fukushima Prefecture was confirmed infected with the novel coronavirus. The woman, who had taken an overseas trip before testing positive, has since retired because her contract expired.

The day after her positive test, two students at a senior high school affiliated with the university were on a train platform at JR Koriyama Station when a middle-aged man pointed at them and said, “Corona, corona.”

The two students cried when they reported the incident to the adviser of their school sports team.

Another student wearing the school uniform was told by an elderly man, “Aren’t you intentionally spreading (the virus)?”

The incident led school officials to prohibit students from wearing the school uniform when coming to school. The ban continued until early April.

The senior high school is located across the street from Koriyama Women’s University. The local public health office said the only people who had come in close contact with the infected professor were 14 individuals at the university.

Still, the university and senior high school received about 150 phone calls and emails criticizing, protesting or mocking the institutions.

“If even a single individual becomes infected, it is considered a problem involving the entire organization, although the hatred should be directed at the virus rather than at people,” Teiko Sasaki, the senior high school principal, said.