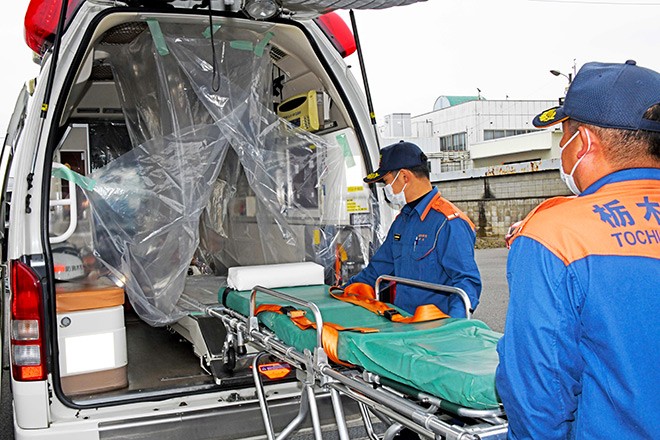 Many ambulance crews are struggling to find hospitals willing to take their patients in a timely manner amid the coronavirus pandemic, new official data shows.

During a one-week period starting April 20, 1,656 ambulance crews had to contact at least four hospitals and spend more than 30 minutes before securing a place to transport a critical patient.

The number of such desperate cases nearly doubled from the same time period last year, according to the Fire and Disaster Management Agency.

The agency said it believes hospitals were hesitant to accept patients suspected of being infected with the novel coronavirus in many of the cases.

Emergency and rescue crews for the Tokyo Fire Department, which manages every municipality in Tokyo except Inagi, had to cope with 520 more cases than they did the same time a year earlier.

Overall, the number of such cases increased 91 percent compared to the same time last year.

The agency shared the information with the health ministry and local governments and is urging them to secure health care facilities to transport people in need of emergency medical attention.

“Many fire departments are having a hard time finding a hospital that accepts them (patients suspected of carrying the coronavirus) right away,” said Sanae Takaichi, the internal affairs minister, on April 28.

In one instance, an ambulance crew from the Osaka Municipal Fire Department received an emergency call from a woman in her 30s in mid-April. She said she had a high fever for two consecutive days.

Nine hospitals rejected the crew’s request to transport the woman, and it took about 30 minutes for the ambulance to finally begin transporting her to one.

“Under normal circumstances, for a patient with a high fever, we would find a hospital in two to three minutes,” an emergency crew member said.