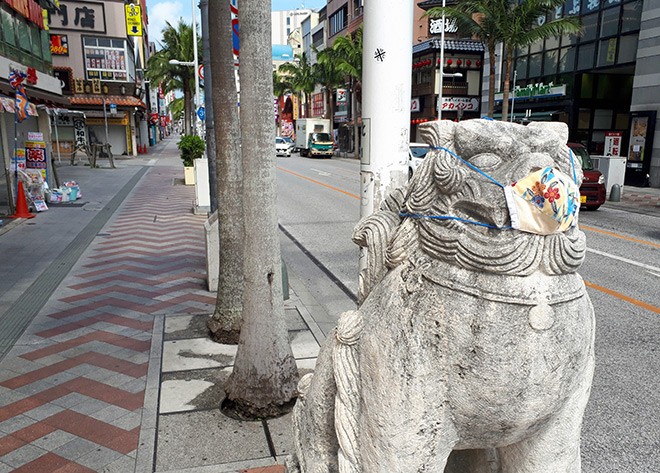 Shops are closed on an empty street in downtown Naha, the capital of popular tourist destination Okinawa Prefecture. (Tsukasa Kimura)

More than 100 businesses in Japan have gone bankrupt during the novel coronavirus pandemic as plummeting tourist numbers and the “stay home” campaign have hammered revenues, a research institute said.

As of the end of April, 109 companies had gone bankrupt, many in the services industry, since the virus started spreading across Japan, Tokyo Shoko Research Ltd. said April 30.

The number will likely rise because small and midsized companies are increasingly experiencing cash-flow problems under the nationwide state of emergency. The state of emergency is expected to be extended beyond the initial deadline of May 6.

The virus has also hit large corporations. Many listed companies have revised downward their business performance forecasts because of the pandemic.

Overall in Japan, the health crisis is expected to result in losses of more than 3 trillion yen ($28 billion) in sales and more than 2 trillion yen in net profits.

There were two COVID-19-related bankruptcy cases in February and 23 in March. In April, when the central government declared the state of emergency, the number shot up to 84, Tokyo Shoko Research said.

On the requests of local governments, an increasing number of people have refrained from going out and more businesses have shut down to control the spread of the virus.

By prefecture, Tokyo had the most bankruptcy cases, at 26, followed by 11 in Hokkaido and seven each in Shizuoka and Osaka.

Twenty-four of the bankruptcies were hotel businesses, and 15 were restaurant operators.