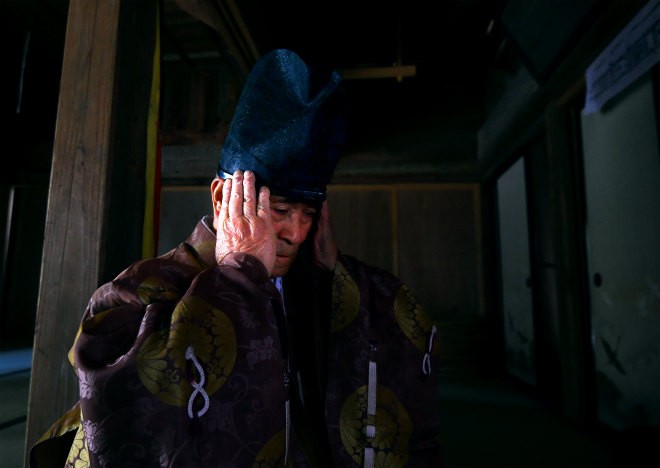 Ise, who is 89 and chief priest of three shrines here, now lives in Fukushima city as an evacuee. But he returns to the shrines twice a month to make sure all is in order--and to connect with any worshipers who might be around.

While Tsushima Inari Jinja shrine lies within a “difficult-to-return zone”, the Shinehajinja and Kunitamajinja shrines are located in areas where evacuation orders have been lifted, and are close to the central part of Namie.

However, few people can be found around those shrines even today, though nearly a decade has passed since the triple meltdown at the Fukushima No. 1 nuclear power plant.

Each time he returns, Ise cleans the main and worship halls and recites a prayer alone. He hasn't missed this ritual once since he was forced to leave his hometown immediately following the disaster.

“People cannot forget their hometowns,” said Ise. “Imagine what people would feel if they found the shrines dilapidated on their return. Shrines are places where residents of the communities can find solace.”

Ise, who resides outside Namie, spends the rest of his time helping his former neighbors.

He organizes funerals and site purification ceremonies for those who commission new homes now that they are living elsewhere and carving out new lives. Ise also offers services to coincide with house demolition and home altar replacement.

Some followers travel from far away to see Ise and share problems with him that they feel they cannot raise with people who are not living as evacuees.

Late last year, the main hall of Kunitamajinja, which was damaged by the Great East Japan Earthquake and subsequent exposure to the elements, was finally torn down. A small shrine was temporarily set up in preparation for the hall’s reconstruction, and Ise offered a charm in prayer for the “community’s security.”

Kazuyuki Owada, 68, a local community head who lives near the shrine, expressed his gratitude for Ise's good works.

“He (Ise) distributes letters and good health charms every year for free to worshipers who currently live separately, and prepares a sacred straw festoon at the shrine to celebrate the New Year,” said Owada. “We cannot live without him.”

“Connecting residents of local communities as chief priest is my fate, as I was born to a family of Shinto priests dating back to the Edo Period (1603-1867),” Ise said.