EDITORIAL: COVID-19 crisis no time to flirt with amending the Constitution 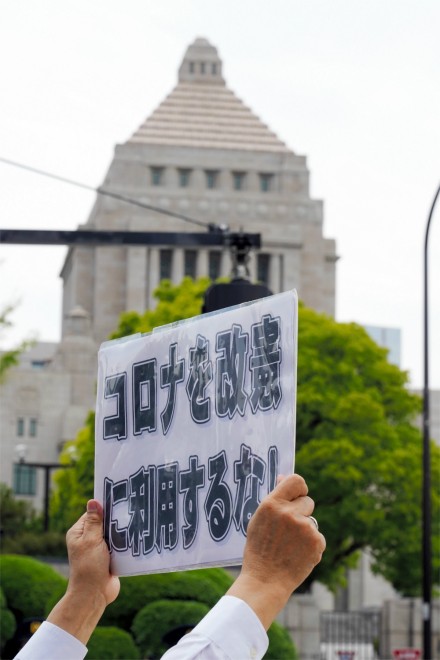 A protester hoists a sign in front of the Diet building on May 3, Constitution Day, that says the government should not use the coronavirus crisis to push for the constitutional revision. (Tsubasa Setoguchi)

This year, Japan marked Constitution Day on May 3 facing unusually deep social strains due to the new coronavirus outbreak.

More than 500 precious lives in this nation have been lost already. Innumerable people are facing a fundamental threat to their livelihoods as voluntary self-isolation and business closures under a nationwide state of emergency take a heavy toll on their incomes.

The principal mission of a nation is to protect its people, and the policies to achieve this goal must be based firmly on the Constitution.

Is the Abe administration carrying out this mission properly?

Article 25 of the Constitution guarantees the people's right to live a decent life by stating, "All people shall have the right to maintain the minimum standards of wholesome and cultured living."

The second paragraph requires the state to "use its endeavors for the promotion and extension of social welfare and security, and of public health."

The Abe administration's policy efforts to control the spread of the virus are based on this requirement.

As the number of confirmed cases of COVID-19 infection rise, the government's desperate efforts to contain the outbreak have resulted in acute shortages of doctors, nurses, hospital beds dedicated to coronavirus patients and even masks and hazmat suits.

An internal affairs ministry assessment of capabilities to deal with an outbreak of an infectious disease in 2017 expressed "misgivings about whether a system is securely established to ensure that infected patients can receive high-quality and appropriate medical treatment."

Those concerns are now justified. Given that the number of public health centers, which should serve as core facilities for public health protection, has been reduced significantly, it is hard to claim that the successive administrations have done enough to ensure the nation is well-prepared for a crisis such as the one we now all face.

Even so, the number of deaths from the pandemic in Japan has been far smaller than for most major Western nations. That is probably due to good access to quality healthcare under a universal health coverage program and the dedicated efforts and ingenuity of frontline health workers that have made up for the difficulties of the situation and the shortages of vital resources.

But there is reason to be worried about the outlook of the public health crisis. As restrictions on the activities of individuals and businesses continue, the ranks of people who are having a hard time trying to "maintain the minimum standards of wholesome and cultured living" will inevitably grow.

The first to suffer will be those who are economically and socially vulnerable, such as non-regular workers, part-timers, the owners of small and individual businesses and single-parent families.

Nearly a month has passed since a state of emergency was declared first for seven hard-hit prefectures, including the Tokyo metropolitan area. Even slight delays in the provision of policy support could be the difference between economic survival and downfall for many people cutting their living expenses to the bone.

Many legal experts contend it is difficult for the government to take action to compensate for drops in people's income due to the effects of the outbreak by using Article 29, which says, "The right to own or to hold property is inviolable," as a legal ground for taking measures to accomplish the objective. But the spirit of Article 25 clearly requires the government to provide the maximum possible social safety net for the needy as a policy priority.

Even those not facing a serious threat to their right to live a decent life are subject to restrictions on their freedom of mobility and business and right to receive education, which are guaranteed by Articles 22 and 26, because of voluntary self-isolation, business shutdowns and school closures.

Unlike the governments in the United States or Europe which have issued "lockdown" orders, enforced with a threat of punishment for violations, the Japanese government has only issued requests for the people to take certain steps voluntarily.

Many Japanese have voluntarily accepted these measures as necessary for stemming the spread of the virus. Even though the goal of reducing social contact by 80 percent, set by Prime Minister Shinzo Abe, has not been achieved, the Japanese approach has started producing certain results.

The Japanese national trait of being susceptible to peer pressure to conform may be working in favor of this strategy. But this policy is also giving rise to some problems that represent the other side of the coin.

There have been cases of intolerance to non-conformity reported across the nation, such as reporting children playing in a park to police or harassing stores and restaurants open for business.

Acts of excessively monitoring and harassing others without paying attention to their unique circumstances are at odds with the principle that all of the people should be "respected as individuals," as upheld by Article 13, which is widely regarded as the most precious of the tenets of the Constitution.

CONSTITUTIONAL AMENDMENT NO ANSWER TO CRISIS

If the state of emergency is extended, the Japanese people will have to endure more weeks of anxiety about their livelihoods and restricted freedom.

To overcome these hardships, the nation needs a leader who is solidly committed to the imperative that the state must protect its people at any cost and the unshakable trust of the people in the leader's commitment.

In an April 7 news conference to declare a state of emergency, however, Abe dodged responsibility for the results of his administration's efforts to control the outbreak by saying, "If the worst-case scenario comes to pass, it will not be enough for me just to take responsibility (for the situation)."

This statement can only be taken as a sign that he does not understand his role as leader.

The crisis has prompted some lawmakers of the ruling Liberal Democratic Party and other political conservatives to start clamoring to introduce a new provision into the Constitution to deal with a national emergency.

The proposed provision would allow the Cabinet to issue ordinances as binding as law when a national emergency arises.

But laws already exist to respond to the current situation in line with the second paragraph of Article 25, such as the special measures law to deal with new influenza outbreaks and the infectious disease law. They provide for an effective legal framework to cope with this emergency without giving the Cabinet the enormous power to temporarily suspend the constitutional order.

The government needs to constantly review the situation to judge whether there are shortcomings in these laws, and whether there is system to ensure appropriate implementations of such legislation.

The Abe administration should not spend time flirting with the idea of changing the Constitution. Instead, it should now focus on making the best possible policy efforts to protect the lives and livelihoods of the people in strict accordance with the Constitution.