VOX POPULI: Right to do foolish things allows people to blow off steam 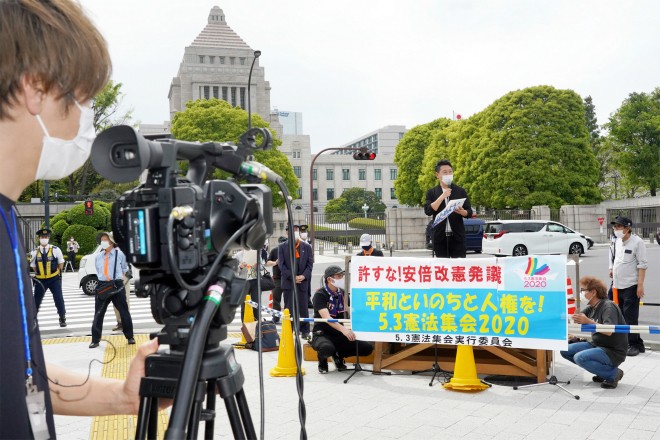 Demonstrators opposed to moves to revise the Constitution hold a small gathering outside the Diet building on May 3, Constitution Day, after canceling a mass rally due to the coronavirus pandemic. Their speeches were streamed to their supporters. (Tsubasa Setoguchi)

The late poet Masako Sato was born on May 3, 1945, the year World War II ended. In her poems, she spoke to the postwar period of the nation as if it were her honored friend from the same class. "I wish you/ Who are of the same age as I am/ A long and healthy life."

Born in Tokyo, Sato also wrote poems about the Constitution, which came into effect on May 3, 1947, exactly two years after her birth. "Containing nothing that is beyond my mind/ It is considerate and well thought out/ I can agree to the 'duties' and have become familiar with the 'rights'/ The deeper I delve into the text, the more enlightened I become"

The poem's unaffected language is a perfect and straightforward ode to the real value of the Constitution.

According to Fujio Nakamura, 70, chief editor of Shi to Shiso (poetry and thought), a monthly poetry magazine, who was her friend of 30 years, Sato mainly composed poems about the lyricism of everyday life rather than social issues.

The poet was deeply traumatized by her mother's suicide, which took place while she was a high school student. Her early poems were tinged with a sense of loss. "The frame of mind expressed in her poems changed after she turned 60," Nakamura says. "Her poems about peace and the postwar era were eye-openers."

Her poem titled "Gukoken" (right to do foolish things) is an unforgettable piece. "Someone spoke about 'gukoken' (the right to do foolish things, not good or bad things)/ I have repeatedly exercised the right brilliantly/ Still I am here, forgiven/ Thanks to my teachers, close friends, family and this era/ It is also thanks to 'basic human rights'"

As I see our society this spring, the air is thick with accusations against people who have done "foolish things." The virus running rampant is upsetting everyone and making people pointedly suspicious of others.

Reading some of the poems composed by Sato has given me a measure of relief from the heaviness of this atmosphere.

Five years ago, the poet, who likened the Constitution to "a forest of abundant oxygen," died with this message: "We have been protected/ So we have to protect"