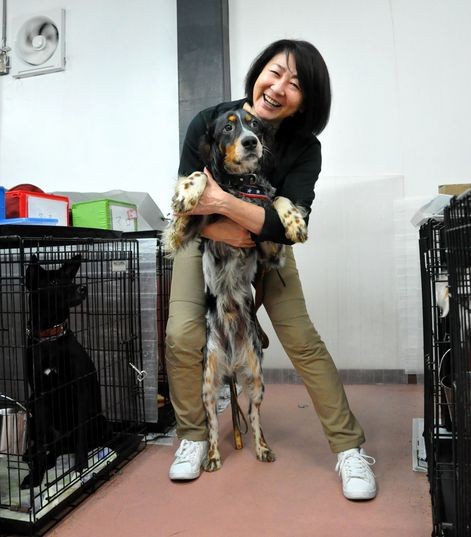 Rie Kaneko has kept a dog that was once abandoned. (Toru Ishii)

ICHIKAWA, Chiba Prefecture--More than 1,000 abandoned hunting dogs have received new lives as house pets thanks to the nearly three-decade efforts of Rie Kaneko.

Kaneko started searching for new masters of bird-hunting dogs after learning that pointers, setters and other canines were being abandoned in early spring after the hunting season ended.

Many of these dogs, trained to find game birds or force them out of hiding, were considered “useless” in the offseason by their owners or became sick.

“The issue of abandoned dogs must be settled through society-wide efforts,” Kaneko, 55, said.

Kaneko set up an animal protection group called the Gundog Rescue CACI here 27 years ago after discovering that many bird-hunting dogs were kept at a municipal center for strays.

About 40 volunteers take care of and retrain the canines.

The organization operates on donations and sales of relevant goods. But huge medical costs to treat many sick hounds saddled her with debts totaling 6 million yen ($56,200) by the end of last year.

In early 2020, Kaneko, hoping to spread awareness of the difficult situation surrounding the abandoned hounds, solicited contributions through crowdfunding.

The online campaign brought in more than 10 million yen from 800 individuals throughout Japan.

Kaneko had a mixed reaction to the amount.

“I feel I can view the success favorably, but at the same time it is scary to bear a much heavier responsibility,” she said.

The campaign allowed Kaneko to build a connection with a new partner: a hunting organization.

“Only a few inconsiderate hunters abandon gundogs, and it (the hunters’ organization) hopes bird-hunting canines can live happily until the last moment of their lives, just like us,” Kaneko said. “I want to deepen our mutual understanding.”