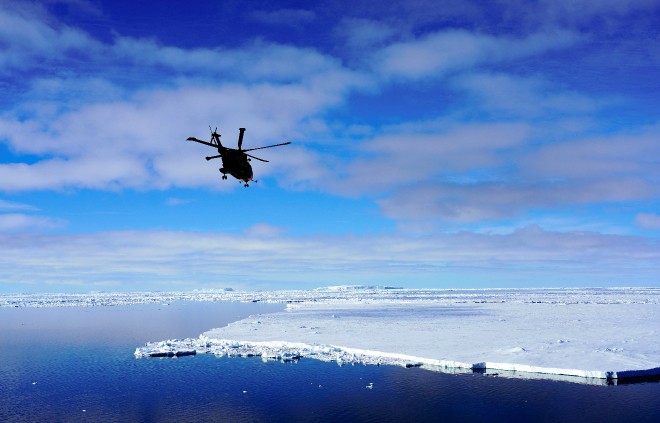 A helicopter heads for the Totten Glacier in Antarctica after taking off from the Shirase research vessel on Dec. 17, 2019. (Yumi Nakayama)

Studies undertaken by the 61st Japanese Antarctic Research Expedition found that warm seawater engulfs the entire area above the continental shelf outside the Totten Glacier.

Members of the summer party who were part of the expedition are already back in Japan and analyzing the data.

Recent advances in satellite technologies for monitoring the heights and masses of ice sheets have revealed that ice is being lost at an accelerated pace in areas around the Totten Glacier.

The end of the glacier juts into the sea. Simulations have shown that a collapse of the glacier’s tongue would induce an outflow of ice from adjacent continental areas into the ocean, leading to a rise in global sea levels by about 4 meters.

Shigeru Aoki, a Hokkaido University oceanographer who heads the expedition, said he and his colleagues believe the loss of so much ice was unlikely the result of a rise in air temperatures as a result of global warming but more likely due to warm seawater flowing beneath the ice.

Ease of access to areas around the Totten Glacier is hindered by the presence of thick sea ice. For this reason, Japanese scientists relied on the country’s Shirase icebreaker and a helicopter to carry out the research. They worked with U.S. and Australian authorities to come up with more than 10 types of measurements done from the air and the vessel.

The Shirase cracked its way open through sea ice and arrived off the Totten Glacier in December. On a subsequent day when the weather was fine, the helicopter took off from the vessel with its rear hatch open and Yoshihiro Nakayama, a 33-year-old oceanographer from Hokkaido University, and others aboard.

“Drop!” the chopper’s pilot instructed as the craft hovered above a tiny opening in the sea surface ice, whereupon a crew member securely buckled at the hatch side lobbed a tubular device into the gap. The mission was carried out with military precision as befitting the skills of the Maritime Self-Defense Force personnel.

In about a minute, water temperature and salinity data began streaming in.

The team members collected data in this manner at 67 sites over six days. They learned that seawater about 0.5 degree above freezing was flowing into broad areas at depths of more than 500 meters beneath the sea surface.

A range of apparatus was used to check water temperature, salinity and other measurements at different sites and depths from aboard the ship. A 700-kilogram metal cylinder was inserted into the seabed to bore through 3 meters of mud.

Equipment resembling a claw crane was also used to lift sediment, including a large rock, from the seafloor measuring at depths of between 400 and 1,000 meters. All sorts of primitive marine life not found in Japanese waters were attached to some of the retrieved specimens.

“None of the creatures had previously been found in this part of the ocean,” said a delighted Yuki Tokuda, a 39-year-old geologist and paleontologist from Tottori University of Environmental Studies.

The topography and geology of the seafloor poses a number of challenges. A type of echo sounder mounted on the hull of the ship was used to prepare the ocean floor for drilling. The instrument was operated by Takuya Itaki, a 50-year-old marine geologist from the National Institute of Advanced Industrial Science and Technology.

“Sediment offers clues to environments of the past,” Itaki noted, adding that it allows scientists to delve tens of thousands of years into the past.

A device designed to continuously measure seawater data was moored at a depth of about 1,000 meters. A geodetic instrument was also installed on the glacier.

The first full-scale measurements showed that the continental shelf in nearby areas lies more than 800 meters below the sea surface with warm seawater present at great depths across the entirety of the immense expanse.

“There are a lot of findings,” Nakayama said. “What I never expected is that these areas have features that are quite unlike those in West Antarctica, where a lot of ice has been lost.”

“We are hoping to combine different measurements to ascertain routes and mechanisms to explain the inflow of warm seawater,” said Aoki, the expedition leader.

***
Asahi Shimbun Staff Writer Yumi Nakayama is accompanying the expedition as a member of the wintering party. The veteran polar reporter accompanied the 45th and 51st Japanese Antarctic expedition and has been to the Arctic seven times.