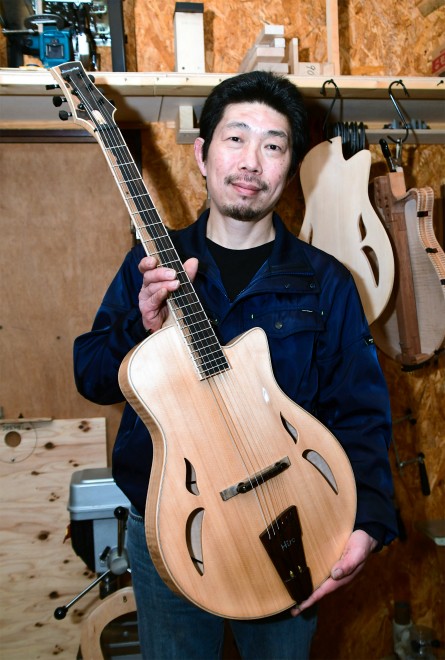 Norimasa Yamaoka holds a JG-1 guitar in the making in his studio in the Mabicho-Kawabe district of Kurashiki, Okayama Prefecture, on April 16. (Kenta Nakamura)

KURASHIKI, Okayama Prefecture--Norimasa Yamaoka stumbled out of bed in response to what sounded like an explosion. He couldn’t get back to sleep that night.

He soon found his entire neighborhood was flooded and, before long, so was his house.

Before he knew it, the water was up to his knees.

Just when he thought it was too late, a Self-Defense Forces boat came to the rescue and evacuated his family from the house through a window.

When he eventually returned, he found that his studio had been devastated.

Rusty tools were strewn across the floor. Drawings and wood molds essential for guitar making were submerged in muddy water.

But after barely making it out of his flooded home in time, he decided not to fret over his ruined workshop and instead poured his heart and soul into rebuilding, redoubling his commitment to his craft.

Refusing to give in, he did not rest. He spent the next nine months working around the clock to repair his house and mud-covered tools.

He managed to recreate a wooden mold from a drawing that survived the disaster.

Then, finally, in April of last year, he reopened.

Yamaoka works alone in his studio in the Mabicho-Kawabe district, up to 12 hours a day.

He specializes in creating archtop guitars usually associated with jazz. Delicate carving techniques are required to put the finishing touches on a curved, smooth guitar body.

The destruction of his studio was not the only major challenge he faced in his career.

He long struggled to find the right job. And when he finally did decide to chase his dreams, he took a difficult path to get there.

Yamaoka was born in Yakage, Okayama Prefecture, in 1964, and moved to Mabi, now part of Kurashiki, in the sixth grade.

He was obsessed with playing the guitar, although performing did not become a career. After graduating from high school, he bounced aimlessly from job to job, working as a car dealer and even at one point as a hang gliding instructor.

But he reached a turning point at 37. That was when his wife, also 37, died from subarachnoid bleeding, leaving behind two small children.

Reflecting on his life, he made up his mind to stop being half-hearted with his goals and finally build the career of his dreams. He thought he could make use of his manual dexterity to produce guitars.

Yamaoka did not learn his trade the way many professional luthiers normally do, though.

Usually, complete amateurs begin studying guitar making at professional schools or repair shops. But Yamaoka decided to teach himself because he thought it would let him bring a new perspective to the craft.

So, he found a book to serve as his guide. He holed up in his parent's home in Mabi, struggling to understand the book, which was written in a foreign language. With no income, he dug into his savings.

Four years later, he completed about 10 guitars. He put them up for sale online, branded as Yamaoka Guitars.

It did not take long before they struck a chord with guitarists. He soon received orders from musical instrument stores across the country and from abroad. Yamaoka even landed an exclusive sales deal with a Tokyo-based musical instrument wholesaler.

After years of self-learning, the results paid off.

His electric guitars earned him the patronage of professional musicians and attracted publicity from home and abroad. Leading jazz guitarist Kazumi Watanabe and other musicians have praised his guitars.

Yamaoka can only produce about a dozen guitars a year, with expensive ones priced at more than 1.4 million yen.

The success lasted until the 2018 flood suddenly wiped away his studio--but not his spirit.

"I'll try to be even more particular about details to create an ideal guitar," Yamaoka said.

The artisan completed a new guitar model in late March.

He intends to also restore the old models for which the molds were lost in the flood.

The expert guitar maker is now trying to share his spirit of resilience as the coronavirus pandemic drags on.

"Everyone, including musicians, are having a hard time because of the novel coronavirus," Yamaoka said.

"To return the favor to those who supported me after the torrential rain, I want to keep making guitars in Mabi to offer comfort."

His guitars can be found at Taurus Corp.'s website at (https://www.taurus-corpo.com/).