COVID-19 cases falling or holding steady in Tokyo and Osaka 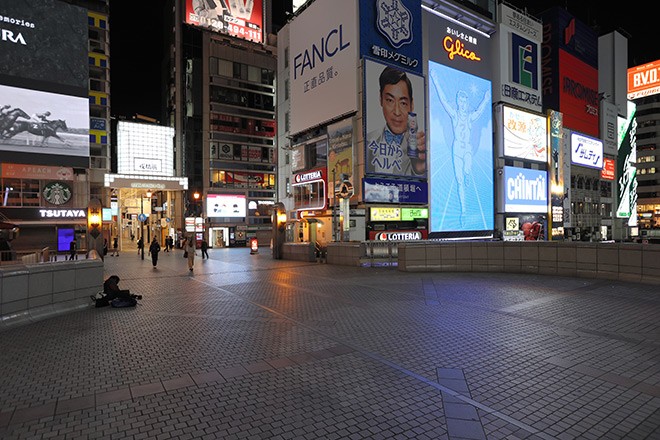 An advertising billboard near the practically deserted Ebisubashi bridge in Osaka city is lit up in blue to show appreciation and support for healthcare workers battling the novel coronavirus on April 30. (Asahi Shimbun file photo)

Health authorities confirmed 121 new cases of coronavirus infection as of 9 p.m. on May 5, bringing the nationwide total to 15,382. Ten more people died as a result of the virus, raising the death toll to 566.

Osaka Prefecture, the nation's third most populous, reported seven new cases, the first time the prefecture has chalked up a single-digit daily tally since March 30. Tokyo confirmed 58 additional cases, the third straight day the figure for the capital fell below 100.

In 13 prefectures designated as requiring special precautions against virus infections, a total of 1,008 people have tested positive for the virus since May 1.

In the other 34 prefectures, which are allowed by the government to partially resume social and economic activities if certain measures are taken to prevent infections, 64 people have been confirmed to be infected since May 1. Of them, 20 prefectures have not reported a single case of infection since May 1.

Meanwhile, cluster infections have been spreading at hospitals and facilities for elderly people.

In Kanagawa Prefecture, three nurses and a patient in her 70s at the Odawara Municipal Hospital tested positive on May 5, bringing the number of confirmed cases related to the hospital, including patients and staff, to 18.

In Toyama Prefecture, a staff member in her 60s working at a healthcare facility for the elderly in Toyama city was confirmed to be infected the same day, raising the total number of infections related to the facility, where cluster infections have occurred, to 58.