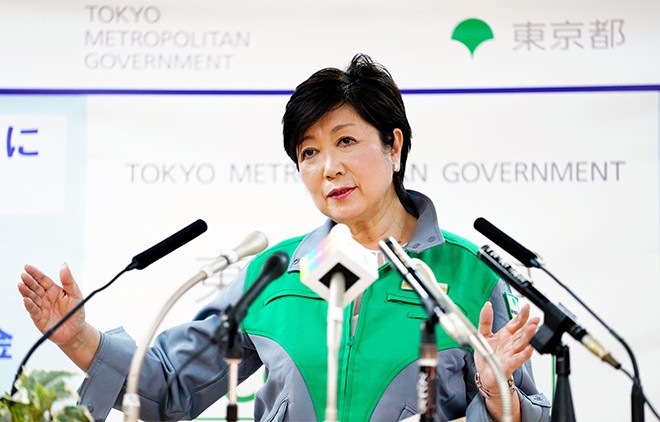 Tokyo Governor Yuriko Koike holds a news conference on May 5 in which she announced an extension of financial support for small businesses. (Ryo Kato)

Authorities in Tokyo pledged May 5 to provide additional financial support to small businesses that comply with a request to close their operations or shorten business hours to help contain the spread of the novel coronavirus.

In April, Tokyo Governor Yuriko Koike announced financial support measures for small businesses that complied with its request between April 16 and May 6. Operators of a single outlet would receive 500,000 yen ($4,700), while those with more than one establishment would get 1 million yen.

Those figures will remain in place for businesses that close operations or shorten business hours between May 7 and 31. May 31 has been set as the new deadline for the state of emergency that was extended May 4 by Prime Minister Shinzo Abe.

The additional financial package will place a huge burden on the coffers of the Tokyo metropolitan government and some officials had opposed the move.

However, at the May 5 news conference, Koike stated: “Small business owners will face a severe situation with the extension of the period for the state of emergency. But if the measures to prevent a further spread are not implemented thoroughly during the extended period, all the efforts made until now will be wasted.”

On April 10, Koike asked a wide range of business sectors to close their operations and requested that restaurants limit business hours to between 5 a.m. and 8 p.m. Those serving alcohol were asked to stop doing so by 7 p.m. so as to avoid large gatherings in enclosed spaces.

The Tokyo metropolitan assembly approved funding that set aside 96 billion yen for financial support for small businesses. The metropolitan government anticipated that around 130,000 businesses would request the handout.

Koike also said at her news conference that the metropolitan government would put together an exit strategy in the near future that would include standards for lifting the requests to residents to remain at home and to businesses to close or shorten operations.

Other local governments also announced their own financial support measures for small businesses that cooperate with requests to close or shorten operations.

The Kanagawa prefectural government announced May 5 that it will pay out 100,000 yen to small business owners who comply with its requests as well as those who voluntarily close operations.

Those businesses would be required to close operations for at least 80 percent of the time between May 7 and 31.

The Fukuoka city government will pay up to 300,000 yen in rent subsidies to small businesses that close or shorten operations.

The Kagoshima and Saga prefectural governments will also provide financial support to certain small businesses that meet conditions set by those governments.

(Rihito Karube and Yusuke Nagano contributed to this article.)