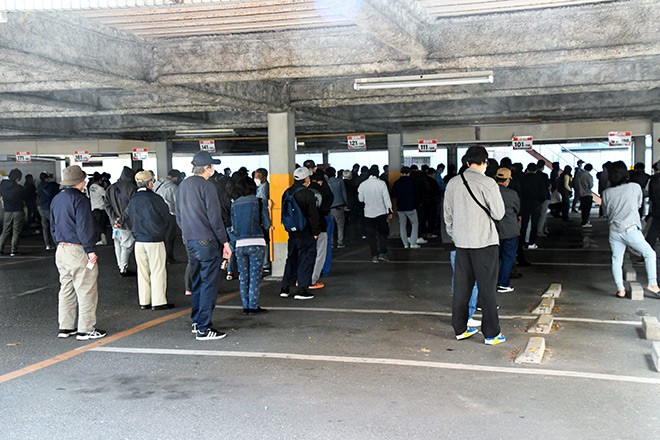 Customers wait for a pachinko parlor in Fukuoka city to open its doors in late April. (Tomoki Miyasaka)

Prefectures with relatively low numbers of novel coronavirus infections are starting to scale back their requests to residents to practice social distancing and to businesses to curtail their operations.

Such requests will remain in place in the 13 harder-hit prefectures that are designated as requiring special precautions to prevent a further spread of the coronavirus.

But under revised guidelines, the 34 other prefectures are allowed to partially resume social and economic activities as long as measures are taken to prevent the spread of infections, such as limiting entry into a facility and calling on customers to not speak out loudly.

Prime Minister Shinzo Abe revised the guidelines for prefectures not covered by the special designation on May 4 when he announced that the nationwide state of emergency over the coronavirus outbreak would be extended until the end of May.

The following day, the Miyagi prefectural government said its request to companies to close or shorten their business hours would be lifted for all sectors from May 7.

“I made a comprehensive decision based on the increase in the number of businesses that are being battered economically,” Miyagi Governor Yoshihiro Murai told reporters.

The northern prefecture has had no new confirmed COVID-19 cases since April 29.

The businesses that will be allowed to resume operations include pachinko parlors, karaoke facilities, sports gyms and live houses.

But they will be called on to take precautions against the spread of the virus, including asking customers to wear face masks and maintain proper social distancing when entering and exiting the establishment.

In addition, Miyagi residents will still be asked to avoid travel to other prefectures and to refrain from frequenting entertainment districts where they may come in close contact with staff.

Aomori Prefecture, also in northern Japan, will lift its requests to businesses from May 7 and retract its request to residents to refrain from nonessential outings.

Other prefectural governments will allow companies to resume normal operations but only in certain business sectors.

For example, Tochigi Prefecture will retract its request to restaurants to stop serving alcohol by 7 p.m.

However，the prefecture will continue to ask sports gyms and establishments where staff are in close and frequent contact with customers to refrain from opening their doors.

Gunma Prefecture said hotels and inns would be allowed to restart operations, but entertainment and commercial facilities will be asked to remain closed.

Fukushima Prefecture said it will continue to ask movie theaters and pachinko parlors to remain shut. Although the number of daily new confirmed infections has decreased in the prefecture, it has not reached and stayed at zero for an extended period.

Fukushima prefectural government officials said they also took into account that neighboring Ibaraki Prefecture is one of the 13 prefectures designated as needing special precautions against the spread of the virus.

Nara Prefecture in central Japan also said its closure requests to businesses will remain in place until May 31.

“If we relax the measures now, there might be the possibility of a sharp increase in new infections,” Nara Governor Shogo Arai said.