Lifting state of emergency to be reviewed on a weekly basis 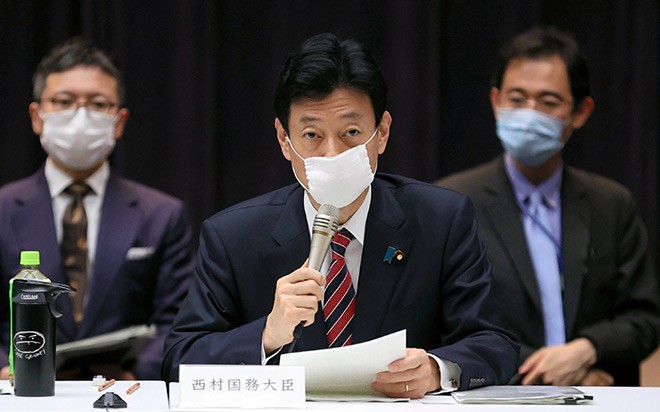 Yasutoshi Nishimura, the minister in charge of novel coronavirus measures, addresses an advisory committee charged with drawing up basic policy and measures to deal with the health crisis on May 4 in Tokyo’s Chiyoda Ward. (Kazuhiro Nagashima)

Having extended its nationwide state of emergency by a month, the government now says it will consider week by week whether to lift it earlier and offered May 21 as a new date, depending on infection rates.

Yasutoshi Nishimura, the state minister of economic revitalization who is also tasked with heading novel coronavirus measures, announced the policy during a May 5 video conference with the National Governors’ Association.

The government has already announced it will decide on May 14 whether to lift the state of emergency ahead of schedule. The addition of May 21 as another possibility means that the government will review the situation on a weekly basis from May 7.

During a news conference after the video conference, Nishimura was asked why the government had decided to consider the possibility of lifting the declaration on May 21 as well.

“We asked the public to stay at home during the Golden Week holiday period until May 6,” Nishimura replied. “We will only be able to gauge the effectiveness of that measure after two weeks (or around May 21).”

Nishimura said the government will make its decision after it consults a panel of health experts analyzing the prevailing situation, including the number of infections and the capacity of medical systems. He pledged that the government would make an "appropriate decision."

Prime Minister Shinzo Abe announced the state of emergency will be extended until May 31 at a May 4 news conference. The declaration was originally issued April 7 for Tokyo and six prefectures, and extended nationwide on April 16.

Abe also said the government planned to decide on May 14 whether to lift the declaration earlier than schedule after analyzing the spread of infections in each area.