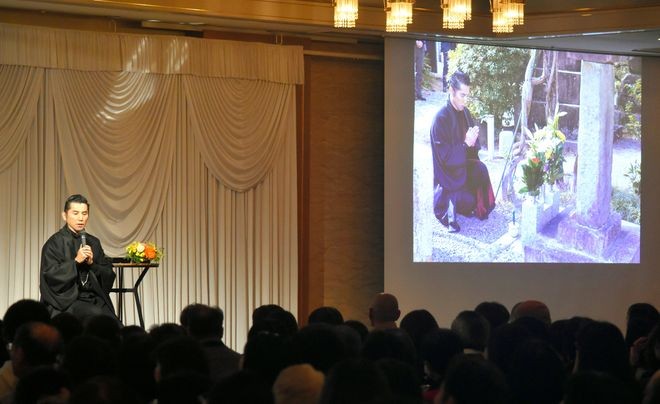 Actor Masahiro Motoki, who is playing Saito Dosan in the current NHK "Taiga" drama series, talks about Dosan at a public talk in Gifu on Jan. 19. (Takuro Yamano)

Kitagawa, 79, is primarily interested in the yearlong drama's portrayal of Saito Dosan (-1556), a samurai whose family temple happened to be none other than Jozaiji.

"Dosan, as played by Masahiro Motoki, has gravitas," Kitagawa said. "When Motoki visited me here at the temple, he studied Dosan's portrait very closely to find out how he grew his beard."

In the drama, Dosan is as commanding a presence as the protagonist, Akechi Mitsuhide (1528-1582). But when Kitagawa was a child, Dosan was perceived as just a nondescript samurai, even in his hometown.

For many, however, the name Dosan is synonymous with "gekokujo," a Japanese term for "overthrowing or surpassing one's superiors."

A son of an oil merchant, Dosan became a retainer of the military governor of Mino (present-day Gifu Prefecture), whose position he eventually usurped. This act of betrayal cemented Dosan's reputation as a villain, and he came to be known by the nickname of "Mino no Mamushi" (The Viper of Mino).

Despite that, droves of self-proclaimed "Dosan fans" began to descend upon Gifu in 1973.

This was triggered by that year's NHK Taiga drama series "Kunitori Monogatari," in which actor Mikijiro Hira portrayed Dosan as a sympathetic character with great personal magnetism.

Kitagawa recalled thousands of fans visiting the temple daily back then and almost causing the main hall's floor to cave in.

"But the fact is, the historical Dosan served his community with great distinction," Kitagawa explained. "He was an inspired administrator who spared no effort to improve local waterways, roads and markets, and consolidated the foundations of his castle town."

The reappearance of Dosan in the NHK drama after a 47-year interval elated locals. But because of the coronavirus pandemic, the annual Dosan Matsuri festival in early April had to be canceled.

And even during the holiday-studded Golden Week, there has been none of the usual influx of tourists this year.

In the drama's latest episode, which aired on May 3, the saga of Dosan's eventful life neared its climax, and I found myself staring at his characteristic beard.

I got the feeling that after being characterized for decades as the archetypal villain of the feudal Sengoku Jidai, or Warring States period (late 15th to late 16th centuries), Dosan may well be portrayed in the days ahead as a new hero committed to "nation building."