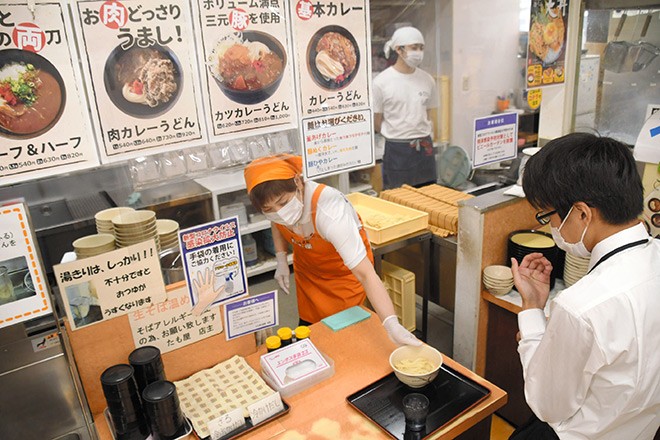 Numerous schools, restaurants and other businesses reopened around Japan on May 7 despite the government's extension of the state of emergency until the end of the month.

Prime Minister Shinzo Abe on May 4 extended the nationwide state of emergency over the COVID-19 pandemic, originally set to end May 6, to May 31.

But local governments in areas where the spread of the virus has been limited decided to lift requests to shut down certain businesses and to allow them to reopen step by step, following the unusually quiet Golden Week holiday period that ended May 6.

Restaurants serving “udon” noodles in Kagawa Prefecture were asked to close from May 2 to 6 to reduce congestion and the risk of spreading infections from tourists flocking there to slurp the local delicacy.

Tamoya Onna Dojo in Takamatsu opened its doors at 10 a.m. on the day, with hungry customers who couldn’t wait to come to the eatery rolling in one after another.

“I worry about what will happen, but the business has to be open,” said Osamu Sasaki, 44, the restaurant’s manager. “Otherwise, we’ll get into financial trouble.”

Transparent sheets were set up at the noodle shop’s order pick-up counter to separate customers from staff as a preventive measure against the virus.

Customers were also asked to don disposable gloves when draining hot water from the noodles, a traditional self-service step required after picking up their order.

“I shouldn’t say it too loudly, ‘Please come to eat,’ ” Sasaki said. “But I will welcome customers with a smile.”

The Fukui prefectural government came up with the phrase “Family Outing Days” for guidelines regarding business reopenings.

Under the guidelines, families are allowed to dine out and participate in outdoor activities. Hotels and ryokan inns are also no longer being asked to shut down.

All 15 hotels and ryokan facilities that belong to a cooperative association in the prefecture’s Awara Onsen district have been closed since April 25.

They have not yet decided when to reopen.

Awara town in the prefecture is an extremely popular hot spring destination in the Kansai region, attracting about 900,000 visitors annually.

Impatient spa lovers started calling the association the morning of May 7, asking if the hot springs were open yet.

“I think every association member is having a tough time financially,” an association staff member said. “I hope we can reopen as soon as possible while ensuring people are safe from getting infected.”

In Hachinohe, Aomori Prefecture, 66 public elementary, junior high and high schools resumed classes on May 7 for the first time in nearly two months.

The city has recorded no new infections for the past month.

The local board of education decided to reopen schools after weighing ways to lessen the burden on children and prevent students from falling behind.

“We have finally resumed,” said school board member Masaomi Nakamura. “I want children to enjoy their school life with their friends.”

Miyagi Prefecture lifted restrictions to close or shorten hours on all businesses.

At around 9:30 a.m., Sugawaraen, a tea shop in Sendai’s Aoba Ward, rolled up its shutters and opened for business for the first time in two weeks.

May is a special month for many Japanese tea shops, as new tea leaves are available.

Sugawaraen employee Nako Sugawara, 24, said she was relieved that the restrictions were lifted and the store is back in business.

“Closing at this time of the year made us very anxious and frustrated,” Sugawara said. However she added, “truthfully, though, I don’t know if reopening is the right answer.”

(This article was written by Kodai Kinoshita, Noriki Nishioka and Naoki Hirano.)