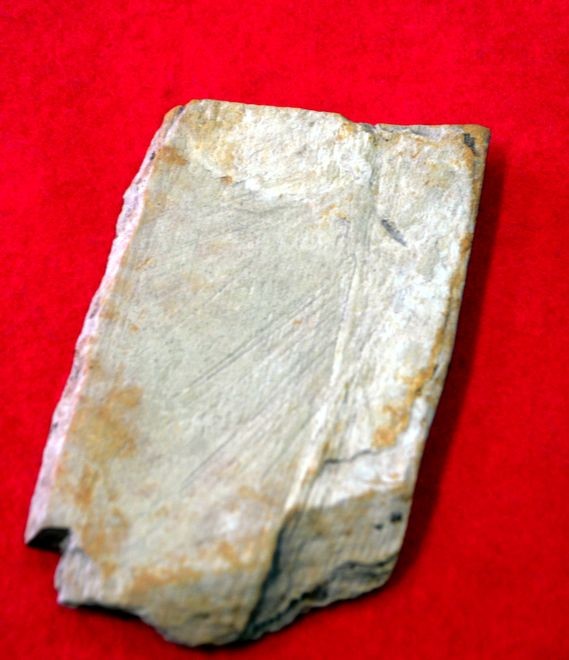 A stone artifact unearthed from the Makimuku archaeological site in Sakurai, Nara Prefecture, which was likely home to the Yamatai state, is described by Yasuo Yanagida as having possibly been used as an ink slab. (Kenji Shimizu)

Many ancient stone pieces previously believed to be whetstones and various other tools may have actually been used to treat ink, according to findings from a recent archaeological survey.

The full-scale use of written characters was previously said to have started around the fifth century in the nation.

But Yasuo Yanagida, a visiting professor of archaeology at Kokugakuin University, argues in his latest paper that more than 150 stone artifacts dating from the Yayoi Pottery Culture Period (1000 B.C.-A.D. 250) and the Kofun Period (third to seventh century) he examined could, in fact, be writing tools.

The findings were published in the bulletin of the Research Center for Makimukugaku, based in Sakurai, Nara Prefecture.

In 2016, an ink slab from the latter half of the Yayoi Period (first to second century) was unearthed at the Mikumo-Iwara archaeological site in Itoshima, Fukuoka Prefecture.

That site is said to have been the capital of Itokoku, a community written about in the ancient Chinese historical document "Gishiwajinden," which recorded encounters with Japan.

Yanagida was inspired by that discovery.

He began measuring and researching stone objects, mainly from the Yayoi Period, found in the Chugoku and Kinki regions as well as other parts of western Japan.

He went to the Makimuku ruins in Sakurai, which were created sometime from the early third century to the early fourth century and were likely home to the Yamatai state.

Yanagida concludes that most of the artifacts originally believed to be whetstones are, in fact, former ink slabs. He notes that inkstones typically have hollows made by rubbing ink and blackish remains likely deriving from ink.

The ink slabs were unearthed at former locations of major communities, dating back to between the middle of the mid-Yayoi Period (c. 100 B.C.) and the mid-Kofun Period (fifth century), when Japan was called Wakoku.

Because many pieces of earthenware from Lelang, a commandery set up by China’s Earlier Han Dynasty on the Korean Peninsula in 108 B.C., have also been discovered at Mikumo-Iwara, where an inkstone was found, Yanagida argues that Japan’s practice of writing was likely introduced around that time.

“The literary culture can be deemed as part of Chinese native culture introduced to Japan when it made contact with Lelang,” Nishitani said.

“Although additional research needs to be carried out to carefully determine whether all the stone tools surveyed are really ink slabs, the study has significance because it indicates use of characters widespread in western Japan from inkstones.”