U.N. appeals for $6.7 billion to fight virus in poor countries 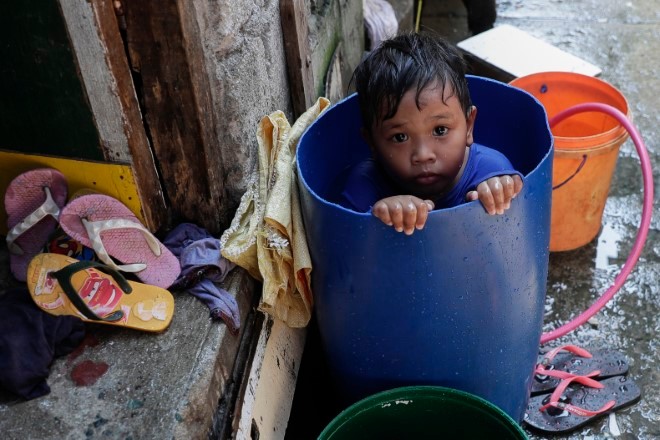 A Filipino boy takes a bath inside a plastic container at a coastal village in Cavite province, south of Manila, during a continuing enhanced community quarantine to prevent the spread of the new coronavirus on May 7. (AP Photo)

UNITED NATIONS--The United Nations called on governments, companies and billionaires Thursday to contribute to a $6.7 billion (712 trillion yen) fund for immediate needs in fighting the coronavirus pandemic in vulnerable countries, warning that a failure to help could lead to a “hunger pandemic,” famine, riots and more conflict.

U.N. humanitarian chief Mark Lowcock said that “COVID-19 has now affected every country and almost every person on the planet.”

He said the U.N.’s initial $2 billion appeal unveiled March 25 was being increased because there is already evidence of incomes plummeting and jobs disappearing, food supplies falling and prices soaring, and children missing vaccinations and meals. He added that the peak of the pandemic isn’t expected to hit the world’s poorest countries for three to six months.

Lowcock said in a video briefing launching the new appeal that the poorest countries face “a double whammy”--the health impact of COVID-19 and “the impact of the global recession and the domestic measures taken to contain the virus.”

“We must be prepared for a rise in conflict, hunger, poverty and disease as economies contract, export earnings, remittances and tourism disappear, and health systems are put under strain,” he warned. “Lockdowns and economic recession may mean a hunger pandemic ahead for millions.”

The executive director of the World Food Program, David Beasley, said there are two keys to averting the possibility of 265 million people being on the brink of famine by the end of the year: providing money and keeping supply chains running smoothly.

The U.N. appeals to wealthy nations for funding all the time, he said, but the pandemic is “a one-time phenomena, a catastrophe we’re hitting,” so it’s not unreasonable to ask the wealthiest people and the wealthiest companies to give.

He also urged action to address the “breakdown of supply chains globally.” Nations must ensure “that we don’t have export-import bans, restrictions at borders, shutdown of ports, shutdown of distribution points,” he said, saying that some countries have already imposed export bans that are having ripple effects on food supplies.

As an example, Beasley said that if young people in urban areas in Africa lose their jobs as a result of the economic impact of the pandemic, they don’t have bank accounts to fall back on. “And if they don’t have food, you’re going to have protests, riots, unrest and destabilization. It’s going to cost the world a hundredfold more to react after the fact,” he warned.

He said that if the world doesn’t respond with sufficient funding, it will be catastrophic.

“We’re facing famine of biblical proportions,” he said. “We can avert famine if we act and we act now.”

The U.N.’s initial $2 billion appeal has so far raised $1 billion, including a lot from Europe--Germany, Britain, the European Commission--with contributions also from Japan, Persian Gulf countries, Canada and others, Lowcock said.

Lowcock said more countries are being monitored for possible addition to the list.

The $6.7 billion will fund the U.N.’s humanitarian response plan to help the world’s most vulnerable people deal with the pandemic now and in the coming months. Lowcock said the amount will be updated before the end of June because the pandemic has created “a very fast-moving situation,” and will likely be revised upward again to meet needs in 2020.

Lowcock also urged international financial institutions and governments to help fragile countries deal with the pandemic and reiterated that $90 billion could provide income support, food and a health response to COVID-19 for 700 million of the world’s most vulnerable people.

That’s just 1 percent of the $8 trillion stimulus package that the world’s 20 richest countries put in place to save the global economy, he said.

Lowcock has said probably two-thirds of the $90 billion could come from international financial institutions like the World Bank and the International Monetary Fund and one-third from a one-time 20 percent increase in government development assistance.

“Wealthy countries will need to make significant one-off increases in their foreign aid commitments,” he said Thursday. “And international financial institutions will need to change lending agreements with vulnerable countries.”

U.N. refugee chief Filippo Grandi said in the briefing that there has not been a major outbreak of COVID-19 in refugee camps but warned that they have an “extraordinary vulnerability” that needs prevention efforts.

Mike Ryan, a doctor who heads the World Health Organization’s emergencies operation, said that people in such camps can’t maintain physical distance and they have “underlying vulnerabilities” with no access to personal hygiene, safe water, sanitation, food and welfare.

“That is the tinder in which this epidemic may explode,” he said.