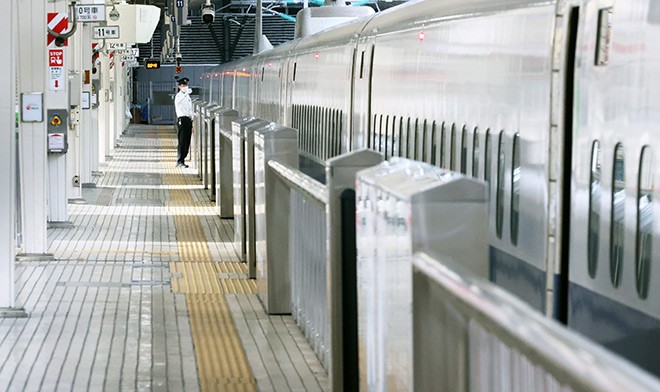 Shinkansen ridership nosedived 95 percent during Japan’s Golden Week holiday period that ended May 6 compared to a year earlier as most travelers stayed home due to the novel coronavirus outbreak.

The three stations with the largest declines were Umeda Station on Osaka Metro Co.’s Midosuji Line with 88.2 percent, Osaka Station with 87.5 percent and New Chitose Airport Station with 87.2 percent, according to analysis of the location information by Softbank Group Corp. affiliate Agoop Corp.

They were followed by Tokyo Station with 86.5 percent, Ginza Station with 85.7 percent and other major stations in Tokyo’s 23 wards.

Agoop compared the estimated average daily pedestrian traffic around 68 stations across the country at 3 p.m. during this year’s holiday period between April 25 and May 6, excluding four weekdays, with that during last year’s 10-day holiday period from April 27 through May 6.

The drop in foot traffic was also large at stations near airports since the number of passengers on flights has plunged.

Tokyo’s Odaiba waterfront district experienced an 87.7 percent drop in pedestrian traffic, while the Yumoto district of Hakone, Kanagawa Prefecture, known for its onsen hot spring resort, had a 91.9 percent decline.

The number of passengers of bullet trains, limited express trains and express trains fell 95 percent to 916,000 compared to a year earlier, data on ridership between April 24 and May 6 released on May 7 by six Japan Railway companies showed.

The figure is the lowest since record-keeping began in 1990. The number of passengers on each Shinkansen line was 3 to 7 percent of the level of last year, according to the companies.

Tokyo Station had just 15 percent of the foot traffic recorded during the same period last year, while crowds at Chiba Station totaled 27 percent of the level of a year earlier, data compiled by East Japan Railway Co. on the number of passengers at each of its stations between April 25 and May 5 showed.

Due to the government’s recent extension of the nationwide state of emergency to May 31, Central Japan Railway Co. will suspend operation of about 20 percent of regular trains on its Tokaido Shinkansen Line for the time being, starting from May 11.

The suspension covers 30 to 40 percent of its Nozomi Shinkansen, but Hikari and Kodama bullet trains will operate as usual.

Other railway operators are also cutting back train services in expectation of reduced ridership.

West Japan Railway Co. and Kyushu Railway Co. will start reducing the number of regular trains on the Sanyo and Kyushu Shinkansen lines by around 30 percent from May 11 as well.