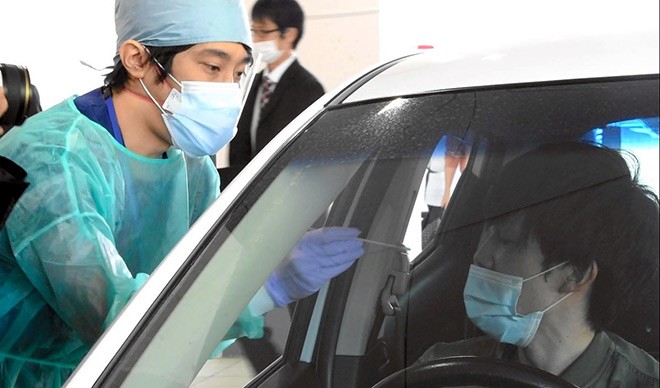 A doctor at the University of Yamanashi Hospital simulates a PCR test ahead of the start of drive-thru service from May 8. (Yukako Ichikawa)

The health ministry on May 8 loosened its guidelines on criteria for individuals applying for the polymerase chain reaction (PCR) test to determine if they are infected by the novel coronavirus.

The ministry came under fire over the ambiguity of wording in initial guidelines issued Feb. 17 to prefectural authorities nationwide. Complaints poured in that local public health centers were using the guidelines as standards to reject individuals calling about taking the PCR test.

Under the new guidelines, anyone with a high fever, breathing difficulties or who is feeling lethargic is encouraged to immediately phone the relevant local public health office to inquire about a PCR test.

Likewise, those vulnerable to serious symptoms of COVID-19, such as senior citizens or those with pre-existing health conditions, can now call even if they only experience minor cold-like symptoms.

Others with cold-like symptoms that have persisted for four or more days are also encouraged to call about possible PCR testing.

Doctors at the locations taking the consultation calls will decide who should receive the PCR test.

Initially, the health ministry guideline was intended to prevent medical institutions from being overrun with patients confirmed with the novel coronavirus but showing no or only minor symptoms. The initial policy was to hospitalize all those who were confirmed positive in the PCR test regardless of the severity of the symptoms.

That policy was changed to allow those with minor symptoms to recuperate at hotels and other places of accommodation.

But complaints still came in from people who said they were not tested despite having various symptoms for a number of days.

Until May 8, the health ministry guidelines recommended making a consultation call if a fever of 37.5 degrees or more lasted for four days and if an individual had breathing difficulties or felt lethargic. However, some local public health offices interpreted that guideline as meaning both conditions had to be met before the PCR test could be recommended.

Those vulnerable to serious symptoms were urged to consult if their fever lasted for two days or more.

At his May 8 news conference, health minister Katsunobu Kato explained that various directives were issued to prefectural governments about the guidelines after complaints about the difficulty in receiving a PCR test.

He said there had been a “misunderstanding” among local governments, adding that the ministry had repeatedly called for the guidelines to be implemented in a flexible manner.

Naoya Sekiya, an associate professor at the University of Tokyo who specializes in disaster information theory, contends that the health ministry, not local governments, should be blamed for not coming out with clearer explanations about PCR testing.

“Dissatisfaction will only multiply unless greater efforts are made to construct an adequate testing structure and to provide highly transparent information,” Sekiya said.

(This article was compiled from reports by Naoyuki Himeno, Kohei Tomida and Hisashi Hattori.)