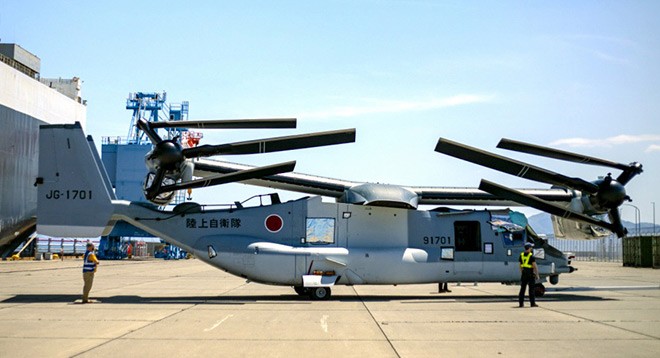 IWAKUNI, Yamaguchi Prefecture--The first two Osprey aircraft to be used by the Ground Self-Defense Force were unloaded at a port here on May 8 and a small group of protesters gathered to voice indignation.

The tilt-rotor transport aircraft will eventually be based on a provisional basis at the GSDF’s Camp Kisarazu in Chiba Prefecture close to Tokyo. But they will first be maintained and inspected at the U.S. Marine Corps Air Station Iwakuni.

The Defense Ministry’s Chugoku-Shikoku Defense Bureau informed Iwakuni city authorities about the unloading of the Osprey aircraft at the U.S. base’s port area.

Bureau officials said setting a definitive schedule for the start of maintenance and inspection of the aircraft, as well as their eventual move to Camp Kisarazu, was hampered by restrictions on outdoor activities due to the novel coronavirus pandemic.

Flight training will also be conducted at Iwakuni ahead of the move.

Eventually, 17 Osprey will be based at Kisarazu.

The first two aircraft were unloaded at the Iwakuni base because of the facility's history since 2012 of accepting the aircraft before their later deployment to U.S. bases in Okinawa Prefecture.

The Iwakuni city government had submitted a request to the Chugoku-Shikoku Defense Bureau to not make it accepted practice to unload all Ospreys to be based in Japan at Iwakuni port.

Ospreys have been a target of strong opposition from local residents due to a spate of crashes in Japan.

Although the original Defense Ministry plan was to deploy the SDF’s Ospreys to Saga Airport on the main southern island of Kyushu, local landowners refused to go along with the plan.

Camp Kisarazu was chosen as a temporary base for the Ospreys in spite of protests by a local citizens group.

Twenty or so people gathered near the port area of the Iwakuni base to protest the unloading of the Ospreys. The protesters said they could not accept even a temporary strengthening of defense capabilities in their neighborhood.