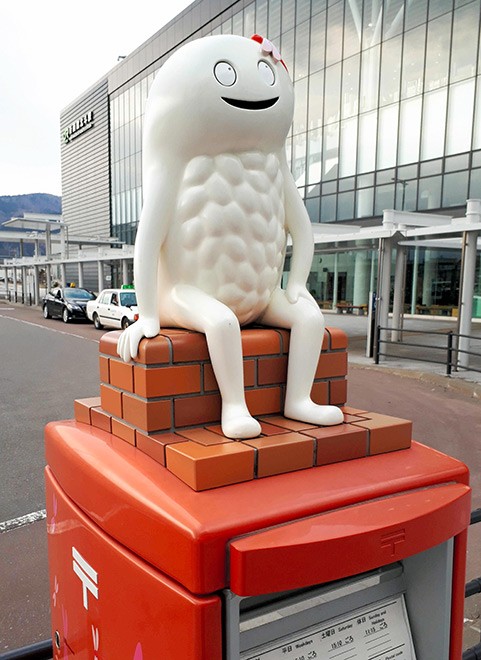 A Zushihocky on a mailbox in front of JR Shin-Hakodate-Hokuto Station on the Hokkaido Shinkansen Line in Hokuto, Hokkaido. (Hiroaki Abe)

The ghostly white mascot often makes small children cry when it appears at events and other occasions, according to the Hokuto city's planning section.

It looks like a "nigiri-zushi" (hand-pressed sushi) made from an oval-shaped ball of Fukkurinko rice, the city's specialty, and a surf clam ("hokki-gai").

Zushihocky became popular for its "kimo-kawa" (creepily cute) appearance and is present at events to promote its hometown, Hakuto.

Students at Future University Hakodate in the neighboring city of Hakodate created Zushihocky in 2013 after Hokuto officials asked them to provide designs for a mascot to promote the city in connection with the opening of the Hokkaido Shinkansen Line.

Those who opted for Zushihocky said that the character looked "shocking" and even "dangerous."

"Zushihocky acts in a nonsensical manner to surprise you, so pay attention to how it moves when you meet it," a Hokuto city official advised.