VOX POPULI: How to celebrate Mother’s Day amid social distancing 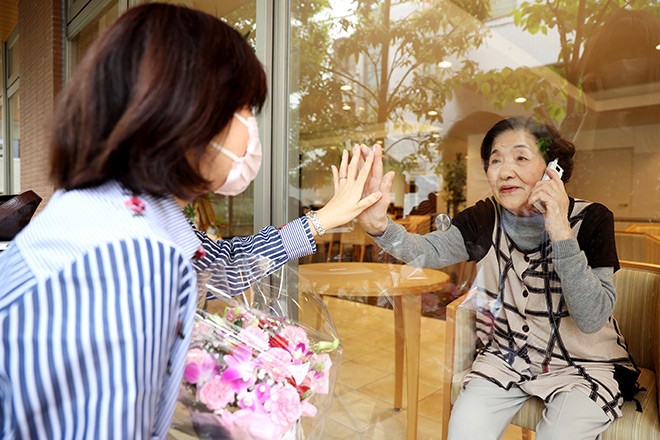 Tomoe Yamamoto, left, meets with her mother, Hiroko Tsuruta, through a glass window at a nursing care facility in Tokyo on May 10, Mother's Day. (The Asahi Shimbun)

Poet and writer Kanoko Okamoto (1889-1939) composed a tanka poem that expressed her longing for her son, Taro, who was pursuing art in Paris.

It is as passionate as a romantic poem.

In an essay, the mother wrote that she “feels frustrated about Paris not being Tokyo” when something sparked a desire to see her son.

One example is when she saw a young man and, from behind, he looked like her son. Another is when she took out her son’s old kimono.

She turned such feelings into a poem.

Japan was so distant from the West in the 1930s.

It may not be as disconnected, but parents and grown-up children who live apart tend to feel separated these days as the latter cannot return to their parents’ homes easily due to the new coronavirus pandemic.

Mother’s Day this year turns out to be a little different from ordinary years.

Some people perhaps refrain from visiting their parents, even if they live nearby, exactly because they care for them.

They can convey their gratitude to their mothers by telephone, video chat or even by letters.

Florists and other businesses are suggesting that mothers be honored this year not only on Mother’s Day but throughout May as a “Mother’s Month.”

If we follow their suggestion, we still have plenty of time to write letters to our mothers.

A handwritten letter, even if it is not long nor adorned with special words, can bring the sender and the recipient closer.

The artist Taro Okamoto sent letters to his mother from Paris.

“Mom, you should be more than a person of sentiment,” he wrote in one.

We can imagine how Kanoko Okamoto read her son’s chiding letter with a motherly smile on her face.