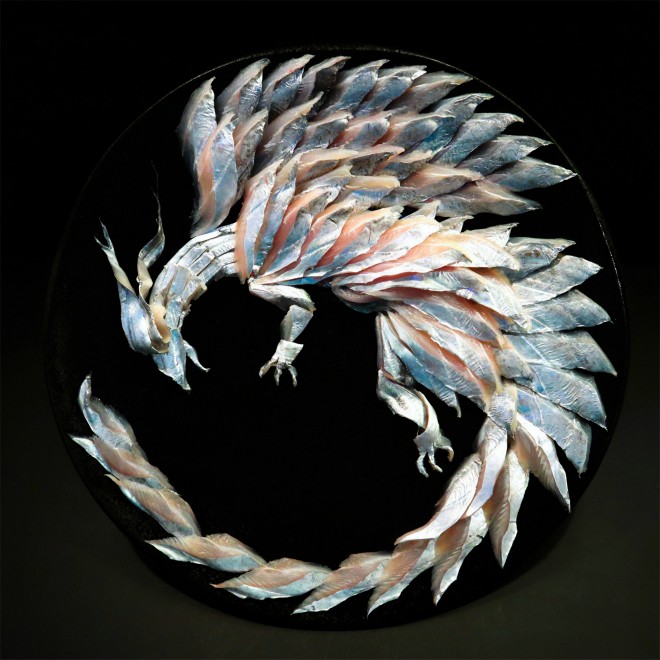 MATSUYAMA--An Instagrammer has faced a smattering of criticism for “playing with his food,” but his intricate use of fish slices to create breathtaking artwork has mainly won accolades from around the world.

The many sashimi creations of the fortysomething company president who calls himself mikyou (@mikyoui00) include a woman in a dress, a Pegasus and a fairy.

The sashimi artist now has 65,000 followers on Instagram, and nearly half of the comments come from overseas.

He lives with his wife and two children. He usually buys fish from a nearby supermarket and at a port market, and creates the art in his kitchen after work or on holidays.

He opened his Instagram account in 2017 to share photos of “sugata zukuri” (slices arranged in the shape of the original fish). The number of followers soared after he tried his hand at artistic sashimi presentations, mikyou said.

The Instagrammer used to draw sketches and think of color combinations before deciding on which fish to use. But mikyou now simply lays out slices of fish to see if he can become inspired to start working.

For his “tsuru-mori,” an arrangement of puffer fish sashimi in the shape of a crane, mikyou watched an online video and practiced several hundred times to master the technique. He initially didn’t even know how to move his hands properly.

Although some Instagram comments have criticized his works as making light of food culture, mikyou says he arranges the sashimi slices in this manner to enjoy eating them. He also said he eats his artworks immediately after taking the photos.

The artistic sashimi dishes are prepared with broad-bladed “deba” and thin-bladed “yanagiba” knives, which are keepsakes from his father.

The artist recently added a new hashtag for his posts: #stayhome.