As face of law and order, police adopt new rules in time of crisis 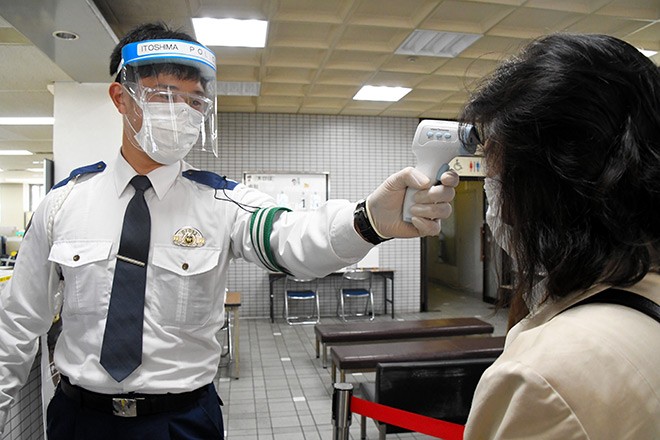 An officer checks a visitor’s body temperature at the Itoshima police station of Fukuoka prefectural police on April 16. (Tomoki Miyasaka)

New methods of policing are taking root as officers nationwide confront the risk of being exposed to the new coronavirus when questioning criminal suspects or dealing with inquiries from the general public.

Deemed essential workers, police cannot afford to take chances. That means they don face masks during one-on-one meetings, also gloves when they locate an elderly person roaming the streets for no good reason, and protective gear for autopsies in cases where the individual suffered a fever before death.

The National Police Agency said 95 police officers and related staff had tested positive for COVID-19 as of May 7.

Since April 7, visitors to the Fukuoka prefectural Itoshima police station have been intercepted by an officer before entering the building.

“We’re checking every visitor’s body temperature,” said an officer, who wore a goggle and face shield to reduce the risk of infection.

"Please raise your fringe," the officer asked a visitor before pointing a thermometer toward the person’s forehead without touching the skin.

The station introduced the routine at the advice of a doctor.

Anyone with a temperature reading of 37.5 degrees or higher is required to remain outside until the purpose of the visit is ascertained.

If it is about reporting an incident or asking for assistance over a crime, the visitor is escorted to a room inside the station to meet an officer wearing protective rain gear and seated behind an acrylic board.

At the Kokura-Minami police station in Kita-Kyushu, also in Fukuoka Prefecture, officers observe social distancing when interacting with colleagues.

When an officer needs to obtain the approval of a superior for something, a long table is set up to ensure the individuals keep a safe distance from each other.

Every two hours, an announcement blares through the police station: “Let’s open windows and doors for ventilation altogether.”

Starting April 3, the Yahata-Nishi police station in the prefecture set aside a special car to transport people with high fevers or those who are suspected of having been exposed to the novel coronavirus.

Officers at the station also fashioned face masks for visitors.

Officers these days are taking more precautions while conducting investigation and interrogation.

Oita prefectural police made it mandatory for every criminal suspect, as well as each officer, to wear a face mask during an interrogation inside the police station.

If a suspect does not have a face mask available, the police station will provide one.

In early April, a man suspected of involvement in a burglary was questioned on a voluntary basis at the Nishi police station of Fukuoka prefectural police.

Since the man worked at a hostess bar in Tokyo’s seedy Kabukicho district, officers isolated him in a bus as a precaution. Officers donned protective gear when they questioned them.

The following day, the man developed a fever.

Police suspended the interview, deeming it unlikely the man would abscond.

If developments require an urgent response, the police will formally arrest the man and hold him in detention in a private room.

Protective gear is also mandatory when an autopsy is performed.

In about a dozen or so cases, officers of the Fukuoka prefectural police wore protective clothing when conducting autopsies on individuals who ran a fever before they died.

The police conducted polymerase chain reaction (PCR) tests on several of the bodies, but none tested positive for the virus.

Officers are also required to wear gloves and a mask when they find an elderly person out on the streets alone and seemingly lost, and decide to place the individual in protective custody.

Officers are required to check the body temperature of such elderly individuals and report their condition to a public health center or medical facility if he or she has a fever.

The prefectural police have provided about 40,000 pairs of gloves for officers who conduct drunk-driving checks.

Usually, a suspect driver is asked to breathe into the officer's face as a smell check. If the presence of alcohol is suspected, a breathalyzer is then used. Given the health crisis, prefectural police authorities ensure that traffic officers use the device only to avoid the risk of infection.

In Tokyo, the Metropolitan Police Department has had the most cases of infection with 34, followed by the Aichi prefectural police department with 24 cases, Hyogo with 14, Saitama and Kanagawa with five each, Kochi with three, and Hokkaido and Osaka with two each.

Ibaraki, Chiba, Toyama and Kyoto prefectural police departments have had one case each.

The Kanto Regional Police Bureau and the Imperial Guard Headquarters have also had one case each.

No prefectural police in Kyushu has tested positive for COVID-19 to date.

Yamaguchi and Okinawa prefectural police have had no cases of infection, either.