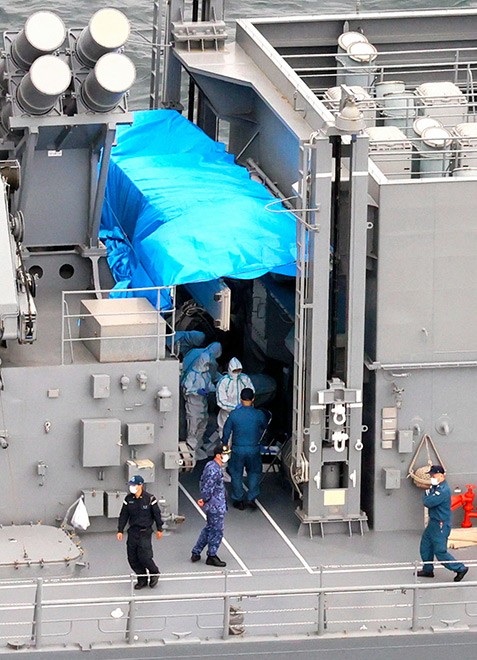 SASEBO, Nagasaki Prefecture--The Maritime Self-Defense Force’s destroyer Kirisame set sail on May 10 to relatively little fanfare and an immediate two-week stay nearby before its intelligence-gathering mission in the Middle East.

Several senior officials of the MSDF Sasebo District Headquarters attended a ceremony held at Kurashima Pier in the morning when the destroyer left the MSDF’s Sasebo Base in Nagasaki Prefecture.

As a precaution against novel coronavirus infections, no guests were invited to the ceremony, and the crew members were not allowed to bid farewell to their families before boarding the ship as they usually do.

Defense Minister Taro Kono’s speech was read by another official.

The 200 or so crew members of the destroyer will undergo polymerase chain reaction (PCR) tests after the departure and will be quarantined for 14 days in waters near Japan to ensure no one is infected with COVID-19.

If an infection is confirmed, the destroyer will return home, and its interior will be disinfected. Crew members who have been in close contact with the infected mate will be isolated.

As was seen on the Diamond Princess cruise ship quarantined at Yokohama Port, infections can spread explosively in the close quarters of a vessel. Group infections have also been reported on aircraft carriers of the United States and France.

As another preventive measure against infections, the Kirisame crew members will refrain from disembarking when the destroyer calls at port to replenish its fuel and food supplies.

Being unusually confined to the ship, the crew members have been provided with DVDs and equipment to connect their smartphones with the internet even out at sea, according to MSDF officials.

The aim of the MSDF mission, which was approved by the Cabinet at the end of 2019, is to gather intelligence to ensure safe passage of Japan-related vessels in the Middle East.

However, in the event of a contingency, the defense minister may order the destroyer to engage in maritime patrol operations with the possible use of weapons if such action is deemed necessary to protect Japan-related vessels.

“The mission alone forces members of the unit to remain on guard (for any contingency), but now they need to watch out for coronavirus infections as well,” a senior SDF official said. “That will be mentally very exhausting.”

The Kirisame is scheduled to arrive in Middle East waters by mid-June to replace the destroyer Takanami, the first unit dispatched for the mission.

The Takanami confirmed that about 4,900 vessels navigated the region during its intelligence-gathering mission between late February and late April, but it reportedly found no abnormalities.

(This article was written by Yoshitaka Ito and Shinya Haraguchi.)