Vietnamese find lifeline at temple in Nagoya after losing jobs 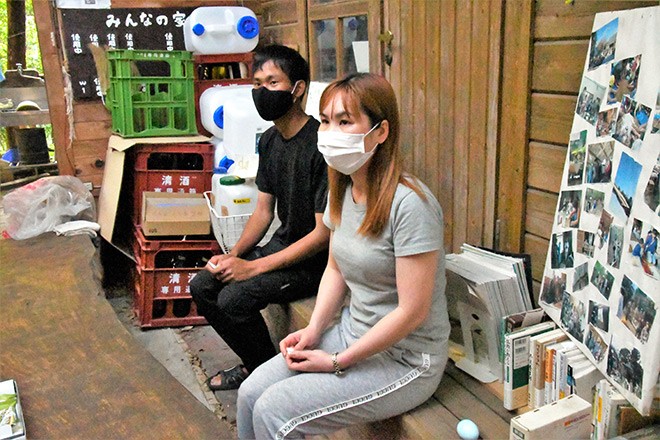 A man and woman, both Vietnamese nationals, stay at Tokurinji temple in Nagoya on May 8. (Ayami Ko)

NAGOYA--After losing his job due to the novel coronavirus outbreak and all hopes of living in Japan, a 24-year-old male Vietnamese national has taken temporary refuge at a temple here.

“I can’t wait to return to Vietnam,” he said.

Stuck in a bind as regular flights to Vietnam were canceled, he asked a Nagoya-based Vietnamese Association in Tokai for assistance.

Duong Thi Thuy Duong, 41, who works at the association, consulted her longtime acquaintance, Shucho Takaoka, 76, chief priest of the Tokurinji temple in Nagoya’s Tenpaku Ward, about half a month ago.

Duong sought to find a living arrangement for the unemployed man.

The man has worked as handyman for the temple since then, doing various chores.

“I’m just waiting for the day until I can go home,” he said quietly.

The temple has accepted people who are struggling to make ends meet for more than 30 years.

The Vietnamese man now staying at the temple came to Japan as a technical intern and worked at a construction company in Fukuoka Prefecture. But he couldn’t stand the cruel working conditions and fled from his employer.

Things appeared fine until January, when he was fired.

“There is no more work for you because of the coronavirus,” he was told by his employer.

He stayed at a friend’s place in Osaka and lived on his savings for a while, hoping the work situation would improve and he could find a job again.

The Vietnamese government tightened restrictions on immigration to reduce the risk of virus infections, including Vietnamese nationals.

Since Vietnam Airlines suspended all international flights starting from March 25, only a few chartered flights have been connecting Japan and Vietnam.

Pregnant women and people with pre-existing conditions are given priority to return to Vietnam on these flights.

The former technical internee has saved enough money for a one-way plane ticket, but he has had no luck in finding an available seat.

STUCK AT TEMPLE WITH NO WAY HOME

Currently, four Vietnamese including the man are living at Tokurinji temple.

A 35-year-old woman has stayed at the temple since mid-April.

She became unemployed in February and has since struggled to find work during the pandemic.

“I thought the virus would be quickly contained in Japan,” she said. “I had no idea it would go on for this long.”

Like the man, the woman also came to Japan as a technical intern to work at a sewing company in Shiga Prefecture, but she later disappeared to find a better working environment.

She has found work on her own, but it was never easy to find a stable job.

Many jobs have been lost during the pandemic, and hers was one of them.

She ended up moving from Hamamatsu to the temple.

“My family in Vietnam is worried about me a lot,” she lamented.

After losing their jobs, both the man and woman reported to the Immigration Services Agency of Japan and received a permit to stay based on their intent to return to Vietnam, according to Duong.

But with all flights being canceled, both have been stuck in Nagoya.

Since January, Duong said, the association has received many consultations from Vietnamese nationals who have lost their jobs and places to live due to the coronavirus.

Many of them said that they have decided to stay in Japan, hoping the situation would improve and they could find work again. But it hasn’t happened, and they are still out of work and can’t afford to pay any rent now, according to the association.

SOURCE OF THE PROBLEM

Labor experts and supporters of technical interns believe that the root of the problem is the government’s foreign technical intern system, which has been plagued with illegal practices such as unpaid wages and long working hours.

As of the end of 2019, 411,000 foreigners had come to Japan through the system. The number doubled in four years, as the government promoted the system to solve serious labor shortages in Japan.

Vietnamese nationals accounted for about 220,000 of the interns, almost half the total number.

Zhen Kai, a 61-year-old staffer at a general labor union in Gifu Prefecture who is originally from China, said, “It’s already time to abolish the system.”

“Issues and concerns of human rights violations have constantly remained with the system,” Zhen said. “They came to Japan because they wanted to live happily, and they have been deprived of the right to pursue happiness.”