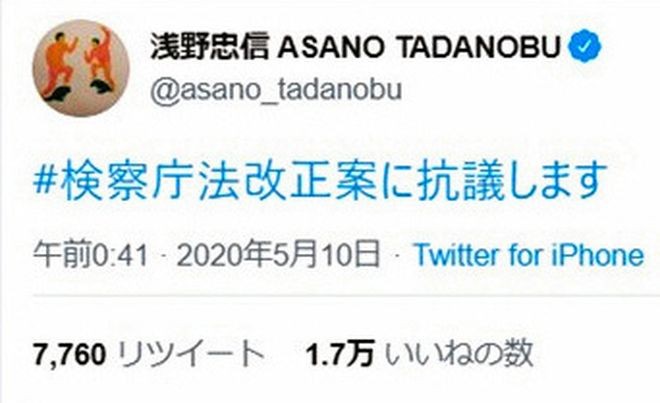 Actor Tadanobu Asano expresses his opposition to the proposed revisions to the Public Prosecutors Office Law on his Twitter post. (Taken from Tadanobu Asano's Twitter page)

A song titled "Gimu" (Duty), written by Osami Okamoto (1942-2015) and sung by Shigeru Izumiya, is about a man heading to a street demonstration.

As he steps out of his home, the man says to his wife, as if to tell himself: "Just for today, I want to be human. So I'll march in a column, blithely."

Writing poems is about the only thing this man likes doing, and he usually doesn't bother to dwell on something like his country's future.

But on this particular day, he resolves to "stand tall and march quietly." He races down the stairs from his apartment, taking two steps at a time.

This man may have been Okamoto's self-portrayal in the 1960s.

And now we have a massive 6 million-plus online demonstration protesting a revision bill that will enable the government to delay the retirement of top prosecutors.

I am wondering how each of the protesters felt as they tweeted or retweeted their objection.

“Please don’t bend the law and politics any further out of self-protection,” wrote actor Arata Iura, one of a good number of celebrities whose posts have captured the public's attention amid the continuing self-isolation brought on by the coronavirus pandemic.

The government already decided to delay the retirement of Hiromu Kurokawa, chief of the Tokyo High Public Prosecutors Office, whose closeness to the Abe administration is no secret.

The decision concerning Kurokawa was treated as a special case. But under the revision bill, it will no longer be special.

This is just not right, hence the huge online protest.

For Prime Minister Shinzo Abe, forcing his irrational way through has obviously become a matter of routine. And for legislators in the ruling coalition, passing any legislation without much thought is probably also just routine.

But this ugly routine has become more visible in this virus-induced unusual time.