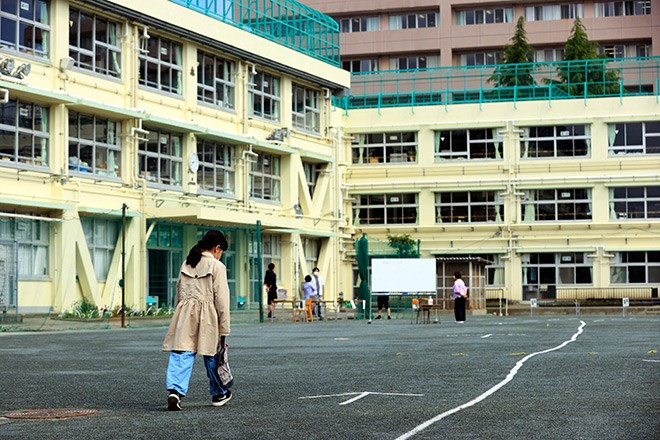 A child heads to an elementary school in Tokyo’s Setagaya Ward on May 11 to pick up study drills and other materials to use while schools remain closed. (Hikaru Uchida)

The number of child abuse cases in Japan per month rose 10 to 20 percent between January and March, coinciding with many families spending more time at home together because of the novel coronavirus outbreak.

A total of 14,974 cases of child abuse were reported in January, up 22 percent from the same period last year, preliminary figures released by the welfare ministry showed.

The ministry compiled the data in response to growing concerns that child abuse cases might increase following school closures and stay-at-home requests from the central and local governments to contain the pandemic.

The data covers child abuse cases nationwide in which child consultation center staff were required to visit children’s homes or to take children into protective custody during the three-month period.

Many schools in Japan have been closed since March 2, after the education ministry requested an emergency shutdown to prevent the spread of the new coronavirus.

Though reported child abuse cases rose between January and March, it is unclear if the impact of the virus was entirely responsible, since cases in Japan were already rising each year, the ministry said.

Child protection workers have voiced strong concerns that cases of child abuse could increase due to prolonged school closures and parents losing their incomes as many people are forced to stay at home amid the outbreak.

The Sapporo child consultation center said it received 146 reports of child abuse in March from police and residents living near families with children, about 1.5 times the number recorded in the same period last year.

The center said cases of psychological abuse, in which children are traumatized by seeing their parents arguing, were high among the reported cases.

The center also provided consultations to parents including those forced to take time off from work and others who were stressed out because their children remained at home all day due to school closures.

“Financial hardship is one of the factors that can trigger child abuse, and the environment surrounding children is deteriorating,” said Tetsuro Tsuzaki, director of the Association for the Prevention of Child Abuse and Neglect, a nonprofit organization located in Osaka.

“Children can’t seek help by themselves, so it takes time before the abuse comes to light,” Tsuzaki added. "We need to check on how they are doing at home by hand delivering printed (teaching materials) to their houses, for example.”

(This article was written by Toko Tanaka and Atsuko Hatayama.)