Asia Today: Philippine lockdown to be eased, with caution 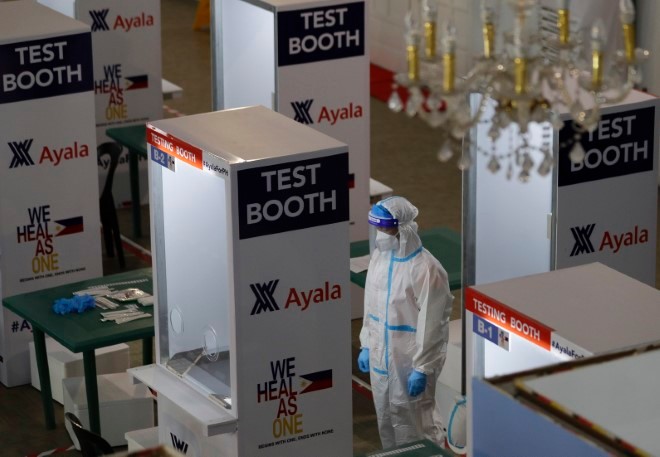 A health worker waits at a COVID-19 testing center at the Palacio de Manila during an enhanced community quarantine to prevent the spread of the new coronavirus on May 11 in Manila. (AP Photo)

BANGKOK--Philippine President Rodrigo Duterte said the massive lockdown that has restricted millions to their homes will be eased, but he warned that people who want to return to work must follow safeguards to avoid more deaths and a second wave of COVID-19 outbreaks.

The Philippine economy contracted in the first quarter and the finance secretary reported that up to 1.5 million jobs have been lost during the lockdown on Luzon island, the country’s most populous region and which includes the capital, Manila.

Duterte made the announcement in videotaped remarks shown on nationwide TV on Tuesday. He said his spokesman will later disclose which regions will remain under lockdown and which areas would be released from it based on the scale and speed of infections. The two-month lockdown was supposed to last until May 15.

The Philippines has reported more than 11,000 infections, including 726 deaths.

CHINA HAS ONE NEW CASE: China reported just one new coronavirus case, as the government presses ahead with reopening measures. Some students in Beijing have returned, and Shanghai Disneyland and the ancient Forbidden City have reopened to limited visitors with social distancing maintained. Also Tuesday, the National Health Commission said 115 people remain in treatment. Tuesday’s single new case follows double-digit increases over the previous two days that had set off renewed warnings from officials for citizens not to become overconfident and prompted the suspension of train service to one affected county in the northeastern province of Jilin.

TESTING SEOUL CLUBGOERS: South Korea has reported 27 new cases as health workers work to test thousands of people who visited nightspots in Seoul after detecting dozens of infections linked to clubgoers. Figures released by South Korea’s Centers for Disease Control and Prevention on Tuesday brought national figures to 10,936 cases and 258 deaths. Clubs in the capital region have been closed again after the outbreak, and the reopening of schools was pushed to May 20. Seoul Mayor Park Won-soon said more than 7,200 people have been tested since the city requested recent visitors to the Itaewon entertainment district get COVID-19 tests.

NEW SOUTH WALES HAS NO NEW CASES: Prime Minister Scott Morrison says Australia is winning the battle against the coronavirus but that it “still has the great potential to do enormous harm to the livelihoods of Australians.” New South Wales, the most populous state, recorded no new cases of coronavirus for the first time since health authorities began documenting them in February. Australia has recorded nearly 7,000 cases, with fewer than 770 active, and 97 deaths. Australian states and territories will start easing restrictions in coming months. The initial phase will allow restaurants and shops to reopen and allow outdoor gatherings of up to 10 people. Social distancing and hygiene measures will be retained.

NO NEW CASES IN NEW ZEALAND: New Zealand reported no new cases of the virus Tuesday, the third day since early last week it has not added cases, as it prepared to relax many of its restrictions. Most businesses, including retail stores, malls, restaurants and gyms, can reopen from Thursday and schools will reopen Monday. Bars can start serving customers again from May 21. Social distancing rules will still apply, and social gatherings will be limited to 10 people.