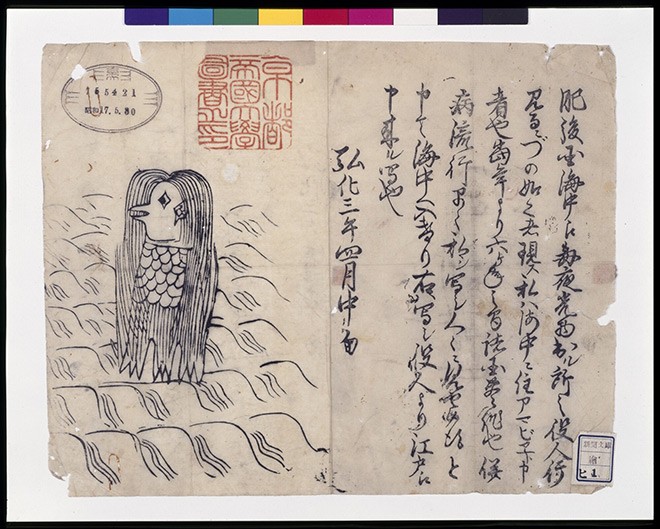 KYOTO--A feudal-era folkloric monster called Amabie has taken Japan by storm for its purported mystical power to fend off plagues.

An increasing number of people are creating goods and illustrations of the mermaid-like “yokai,” or supernatural creature, and are sharing its images on Twitter with the hope it will bring an end to the new coronavirus pandemic.

Legend has it the glowing yokai emerged from the sea in front of a government official in Higo province, or modern-day Kumamoto Prefecture, in 1846 during the Edo Period (1603-1867).

According to an illustrated "kawaraban" printed news bulletin kept at Kyoto University Library, the creature told the official: "I am Amabie who lives in the sea. There will be a good harvest across the country for the next six years. If there should be an epidemic, draw a picture of me and show it to people."

Then the monster returned to the sea, the document said.

The mythical creature quickly became a viral sensation on social media and its popularity has lasted for months.

"Accompany Amabie and eradicate the disease," one individual tweeted.

Another said: "I knitted Amabie-san. Expel the disease!"

The number of Amabie-related tweets began to increase in late February, and about 10,000 tweets have been posted almost daily.

"Although the medium changed from kawaraban to social media, it is interesting to see how people place their hope in Amabie to end the disease," said Nobuko Kajiyama, 49, who works at the Kyoto University Library.

In early March, the library took part in the Amabie craze by posting the original drawing from the Edo Period news bulletin on its official Twitter account.

"It has been published on the Rare Materials Digital Archive, please make use of it," the account tweeted.

With its long hair, beak-like mouth, scaled body and three fin-like legs, the yokai's simple but distinct and somewhat cute appearance has appealed to many and apparently made it easy for them to create and share Amabie-related goods and images as the coronavirus pandemic drags on.

Ema Okamoto, 47, a Nishijin-ori textile designer at Nishijin Okamoto in Kyoto, made a textile piece featuring designs based on Amabie from the original drawing. When she created a lucky charm using the textile and posted its image on Twitter, it generated a huge response.

"It looks cute, so I hope it can give comfort to everyone, even if only slightly," she said.

In early March, Junya Kono, 37, a yokai culture researcher who serves as an instructor at the Kyoto Saga University of Arts, posted an image on Twitter of an amulet he made that depicts Amabie.

"It has always been famous among hard-core yokai fans because the original drawing in the kawaraban is so terrible," he said. "It prophesied not only about an epidemic but also a good harvest, so I hope it also plays a role in economic recovery."

It also features ceramics, sculptures and other works crafted by 79 artists and artisans and posted on Twitter.

Part of the proceeds will be donated to measures for dealing with the coronavirus pandemic, the publisher said.