State: Stay out of areas removed from state of emergency 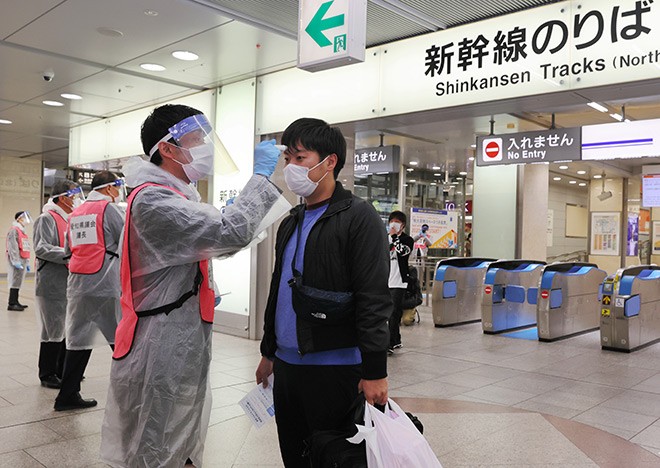 A passenger’s temperature is taken in front of the Shinkansen bullet train gates at JR Nagoya Station on April 29. (Asahi Shimbun file photo)

The government will urge people to remain diligent against novel coronavirus infections by refraining from entering prefectures where the national state of emergency is lifted, Yasutoshi Nishimura, the economic revitalization minister, said.

The government’s expert panel will meet on May 14 to discuss the infection situation around Japan and decide if some areas should be removed from the state of emergency before its expected expiration on May 31.

Nishimura, who heads the COVID-19 response team, has indicated that many of the 34 prefectures that are not designated as “special alert areas” could be allowed to gradually reopen. But he called for continued caution at a news conference on May 12.

“We would like to ask people not to cross the borders between prefectures where the national state of emergency is lifted and the special alert prefectures,” he said. “I would like to clearly state that in the basic action policy.”

Tokyo, Osaka and 11 other prefectures with large urban centers remain special alert areas where extra precautions are advised to prevent the spread of the virus.

The National Governors’ Association at a videoconference on May 12 also agreed to ask people to refrain from nonessential travel across borders after the state of emergency is lifted for some prefectures.

“When the state of emergency is lifted in some areas, it is important for people from outside not to enter the areas,” Tokushima Governor Kamon Iizumi, who is also the association chairman, said.

The association submitted an urgent proposal for help on this request to Nishimura on May 13.

It asked the central government to dramatically increase the amount of special grants for regional revitalization.

In addition, the governors requested that the central government hasten procedures for the employment adjustment subsidies system.

(The article was written by Dai Nagata, Haruhiro Hirahata and Ryutaro Abe.)