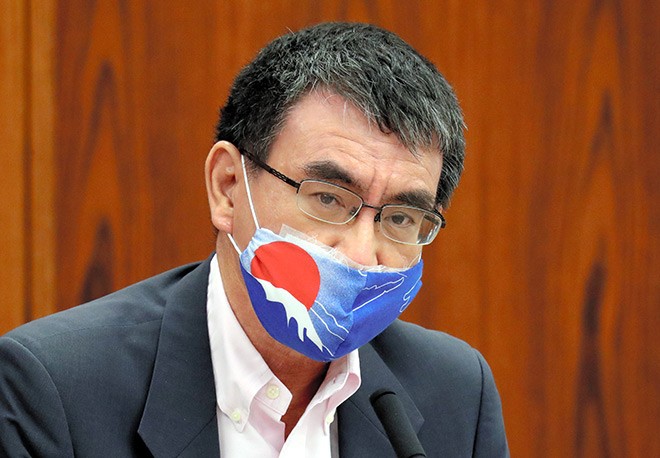 U.S. President Donald Trump has made it a point of not wearing a face mask in public, but in Japan politicians and local officials have adopted stylish gear so eagerly it raised suspicions that they are doing it simply to glean more "likes" on social media.

Gone are the bland, white face masks that most people are used to. Politicians are adopting mask styles across a wide range of designs, while some local government officials are incorporating local features into theirs to promote their respective jurisdictions.

“Since we all have to wear face masks for an extended period, it is only natural for some people to want to make a fashion statement,” said Defense Minister Taro Kono, when asked about face masks at a May 1 news conference.

Kono appeared at the Upper House Foreign Affairs and Defense Committee on May 12 wearing a face mask featuring the sun rising over Mount Fuji, set against a blue background.

The mask was fashioned from a hand towel used by members of the Air Self-Defense Force. Kono also has the option of a mask displaying an ASDF fighter.

Tokyo Governor Yuriko Koike has worn a wide variety of designs to her daily news conferences. Some display her initial, “Y,” while others are decorated with apples and rabbits.

Yasutoshi Nishimura, the state minister in charge of economic revitalization who also oversees the government effort to deal with the coronavirus outbreak, often wears a cloth mask with a 3D design to his news conferences.

Some on social media claim they have succeeded in copying Nishimura’s mask design.

Other politicians are opting for face masks that help promote their constituencies.

Tomomi Inada, the executive acting secretary-general of the ruling Liberal Democratic Party, wears masks made of lace manufactured in her home prefecture of Fukui. She explained that Fukui produces fabrics perfectly suited for face masks.

Okinawa Governor Denny Tamaki has a wardrobe that includes 15 colorful face masks made from traditional designs produced in the southernmost prefecture. The masks are all handmade by his wife, Chieko.

She said she has received various masks made by women in her prefecture and admitted that even she has applied cherry seals to dress up her face masks.

“I want to wear the face masks at various occasions, since residents have gone out of their way to give them to me,” Yoshimura said.

Chief Cabinet Secretary Yoshihide Suga attended his daily news conference on May 7 wearing a face mask with an Ainu pattern stitched onto a white background. Along with his other responsibilities, Suga handles policy related to the Ainu, the indigenous people of Hokkaido.

Suga explained the pattern is a symbol from Ainu culture used to ward off illness.

“I wore it because not only is it a charm, but it also promotes information about the Ainu culture,” Suga said.