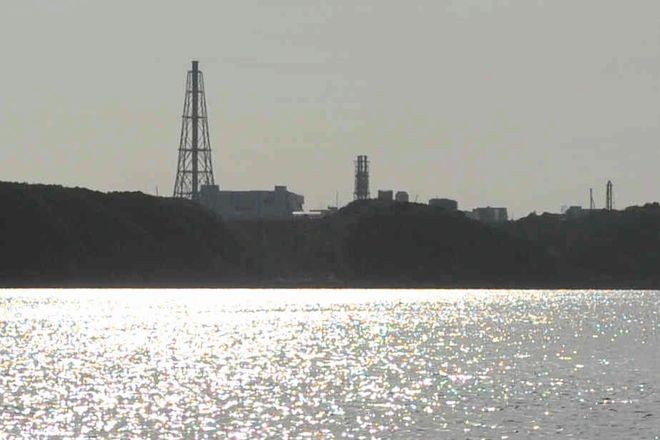 A view of the under-construction reprocessing plant, seen from the Obuchi-numa swamp in Rokkasho, Aomori Prefecture, on May 12. (Taiji Ito)

Japanese nuclear regulators have endorsed the safety of a contentious plant to reprocess spent nuclear fuel.

The Nuclear Regulation Authority (NRA) on May 13 approved a draft report on the safety inspection of the reprocessing plant being built in Rokkasho, Aomori Prefecture, by Japan Nuclear Fuel Ltd.

Japan’s policy program to establish a nuclear fuel recycling system to recover plutonium from spent nuclear fuel to be reused in reactors, however, is already bankrupt beyond redemption. Operating the reprocessing plant simply does not make sense because of the many problems it entails with regard to nuclear proliferation, cost effectiveness, energy security and other important policy issues.

Prime Minister Shinzo Abe’s administration should change its policy concerning nuclear fuel recycling. It would be irresponsible to maintain this unsustainable national policy aimlessly simply because of the NRA’s verdict that the plant meets the new safety standards.

The government and the electric power industry have been promoting the concept of recycling separated plutonium back into the fuel of reactors as a valuable “semi-homemade” energy source for a nation without much natural resources.

The Rokkasho reprocessing plant, the core facility for this strategy, was originally scheduled to be completed in 1997, but the deadline has been delayed as many as 24 times due to a series of technological glitches and other problems.

The plant started a trial run in 2006, but the process was plagued by malfunctions and suspended after the catastrophic accident at the Fukushima No. 1 nuclear power plant in 2011.

The NRA, which was created after the accident, spent six years carefully assessing the safety of the reprocessing plant. It was the body’s first safety screening mission for a nuclear fuel reprocessing facility.

Despite the nuclear watchdog’s effective endorsement of its safety, the plant still has a long way to go before it becomes ready for full-scale operation. The details of its design will be scrutinized while the work to install required safety measures has yet to be carried out.

It is unclear whether the plant will be completed in fiscal 2021, the new deadline set by the operator. Winning the consent of the local community is another challenge that has to be overcome before the plant can come on stream.

At nuclear power plants across the nation, growing amounts of spent nuclear fuel are waiting to be shipped to the reprocessing plant. At some nuclear plants, there is not much room left in the spent fuel pools. The power industry warns that there could be disruptions in power generation unless the reprocessing plant starts operating.

The Rokkasho plant is designed to reprocess up to 800 tons of spent fuel annually to extract plutonium. It is true that the facility would help prevent a situation where there is no room left in the pools.

The plant, when it operates at full capacity, could extract as much as seven tons of plutonium from spent reactor fuel a year. The problem is that there will be few plausible ways to use the material.

The plan to develop a fast neutron reactor that can burn and breed plutonium, which was supposed to be the key technology for plutonium consumption, has gone awry after it was decided that Japan’s “Monju” prototype sodium-cooled fast-breeder reactor should be decommissioned following a sodium leak accident.

There is no plan to develop a new demonstration fast-breeder reactor to succeed the Monju.

The Japanese government then considered participating in France’s Advanced Sodium Technical Reactor for Industrial Demonstration (ASTRID) project to build a prototype sodium-cooled nuclear reactor. But the idea was dropped after the French government decided to scale down and possibly pull the plug on the project.

Japan’s plan to burn so-called MOX (mixed oxide) fuel, which is usually plutonium blended with natural uranium, in existing nuclear reactors has also failed to make progress as fast as the government expected. Currently, only four reactors are using MOX fuel, far less than the industry’s target of operating 16 to 18 MOX reactors.

In short, there is little prospect for massive consumption of plutonium in this nation, at least in the near future.

Japan has a stockpile of 46 tons of weapons-usable plutonium, enough for producing 6,000 atomic bombs. Japan has made an international commitment to reducing its plutonium stock.

If Japan starts extracting plutonium from spent nuclear fuel through reprocessing, the international community will become doubtful of its commitment to reducing its plutonium stockpile despite being the only country to have suffered the devastation of atomic bombings.

Japan could even be suspected of harboring an ambition to develop and possess nuclear weapons in the future.

The government plans to limit the amount of plutonium extracted from spent fuel to less than the volume consumed at the MOX reactors.

But reprocessing spent reactor fuel to recover plutonium simply does not make sense in the first place when the amount of material stored in Japan should be slashed.

The nuclear fuel recycling policy is also losing its economic rationale as well due to ballooning costs.

Even ordinary nuclear power generation is losing its competitiveness against other energy sources because of higher costs. The cost of building the reprocessing plant is now estimated at 2.9 trillion yen ($27.13 billion), four times higher than the original estimate. The total amount to be shelled out for the project, including operational and scrapping costs, is projected to be nearly 14 trillion yen.

Most major industrial nations have given up on the idea of nuclear fuel recycling as not being worth the cost. All the other countries that are still pursuing this path, including China and Russia, are nuclear powers. Most of these projects are strategic state-financed efforts that disregard costs.

But the reprocessing and MOX reactor projects in Japan are private-sector businesses. The costs involved have to be passed onto consumers through higher electricity bills.

The government and the industry should not be allowed to continue pursuing this unreasonable nuclear fuel policy at the expense of consumers.

In many other parts of the world, renewable energy sources are fast gaining ground, eroding the share of nuclear power.

In addition to sharp declines in costs, the fact that solar and wind power is a purely “homemade” energy source for any country is accelerating the trend.

If Japan really places a high policy priority on energy security, it would make much more sense for it to expand “purely homemade” energy sources than promote a “semi-homemade” one.

But the government continues sticking to the nation’s traditional nuclear power policy, putting a damper on growth in renewable energy production.

If the government decides to scuttle the nuclear fuel recycling agenda, it will immediately face the sticky challenge of deciding how to dispose of spent nuclear fuel.

But the project should not be kept alive through irresponsible collusion between the government and the power industry to avoid tackling this challenge.

Political leaders should make the tough decision as soon as possible to put the nation on a path toward a new energy future.