Panel approves lifting of state of emergency for 39 prefectures 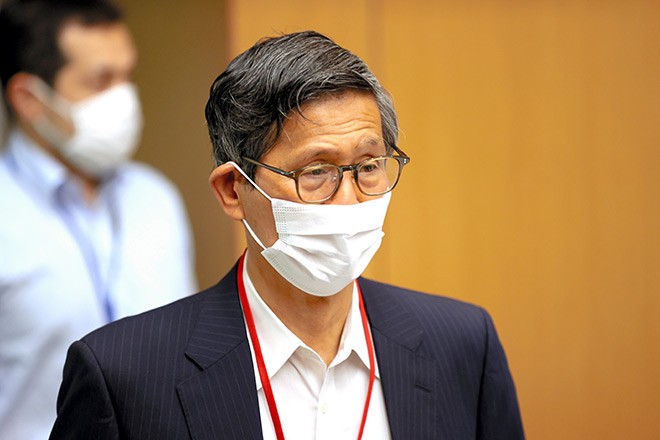 Shigeru Omi, the vice chairman of a panel of experts dealing with the coronavirus outbreak, heads to the May 14 meeting where discussions were held on lifting the state of emergency. (Hiroki Endo)

A government advisory panel on May 14 approved lifting the state of emergency for 39 of Japan’s 47 prefectures after the number of new COVID-19 cases decreased following the Golden Week holidays.

Formal approval for the lifting was to be made later in the day after Prime Minister Shinzo Abe explains the reasons at a news conference.

The eight prefectures where the state of emergency will remain until May 31 are Hokkaido, Tokyo, Kanagawa, Saitama, Chiba, Osaka, Kyoto and Hyogo.

The advisory panel’s approval came after a panel of experts gave its views about the novel coronavirus situation and recommended measures to prevent future spikes in infections in the 39 prefectures after they are removed from the state of emergency.

Five of the prefectures--Ibaraki, Ishikawa, Gifu, Aichi and Fukuoka--were designated as areas where special precautions were needed to prevent a surge in new infections.

Among the 34 other prefectures, Ehime Prefecture was to have the state of emergency lifted “conditionally” because it reported on May 13 a cluster infection of about 20 individuals at a medical institution.

Ehime Prefecture will be called on to thoroughly trace the route of the infections and report its findings to the central government.

Officials had feared that the virus could spread rapidly during the Golden Week of holidays earlier this month, when families normally crowd trains, planes and highways for domestic and overseas trips.

But traffic was considerably lighter this year, and the number of new infections did not surge as feared.

However, the government has warned the public not to become complacent.

Yasutoshi Nishimura, the state minister in charge of economic revitalization who also oversees the government handling of the novel coronavirus outbreak, told the panel meeting that 81 business groups on May 14 would release separate guidelines on how companies should gradually resume business operations.

Sources said the panel proposed classifying prefectures in three stages to reduce the risk of further infections after the state of emergency is lifted.

One classification is the current one that designates areas requiring special precautions.

A new classification would be for areas with about half of the number of new infection cases of the specially designated prefectures.

Areas under the new classification should be cautious about further infections by asking residents to avoid nonessential trips to other prefectures as well as visits to local venues that are unventilated, congested and where contact with others is highly likely.

Governors in those areas could also ask organizers to refrain from holding large-scale events.

The third classification would be for prefectures with even fewer new infections than the “cautious” group, but they should continue monitoring new infections in their jurisdictions.

Governors in the third category could allow some small-scale events to be held.

Prefectural governors would be given the authority to decide which designation best fits their jurisdiction.

The panel of experts made clear that a state of emergency could again be declared in prefectures that record a sharp increase in new infections, but it gave no specific numerical standards for such a move.

The panel only said a comprehensive decision should be made based on trends in new infections as well as how the medical care structure is holding up.

While Kyoto and Chiba have seen a steady decline in new infections, the state of emergency was maintained because of their respective close proximities to Osaka and Tokyo.