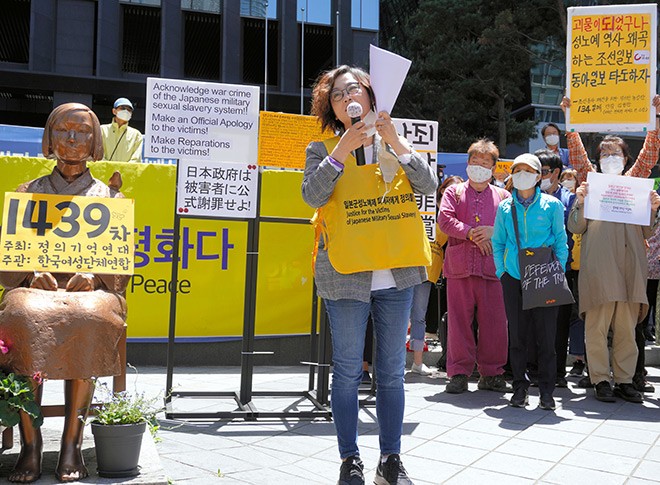 Lee Na-young, head of the Korean Council for Justice and Remembrance for the Issues of Military Sexual Slavery by Japan, speaks at a rally held near the Japanese Embassy in Seoul on May 13. (Takuya Suzuki)

SEOUL--A South Korean citizens group that has criticized Japan for decades over the “comfort women” issue now finds itself accused of misappropriating donations that were intended for the wartime victims.

The Seoul-based Korean Council for Justice and Remembrance for the Issues of Military Sexual Slavery by Japan has denied any wrongdoing, but the scandal shows no signs of relenting.

News media in South Korea have generally shown a reluctance to criticize organizations that support former “comfort women,” a euphemism for women who were forced to provide sex to Japanese troops before and during World War II.

But one of these women, Lee Yong-su, 91, opened a can of worms on May 7 by publicly saying that money donated to the council has “not been spent” for the survivors as promised.

“I have been taken advantage of by (the group),” Lee said at a news conference.

She also urged the organization to cancel its weekly protest rally, which has been held every Wednesday near the Japanese Embassy in Seoul since 1992, because it “does young people harm.”

Yoon ran as ruling party-affiliated candidate in the April general election and won a seat in the National Assembly.

Lee, one of the plaintiffs who have sued the Japanese government for compensation over their suffering during Japan’s 1910-45 colonization of the Korean Peninsula, was reportedly against Yoon’s foray into politics.

The Korean council has opposed the Asian Women’s Fund that the Japanese government established in 1995 to send redress money to former comfort women.

The group also criticized the 2015 Japan-South Korea bilateral agreement on settling the comfort women issue on grounds that it does not acknowledge the Japanese government’s legal responsibility.

But the conservative newspaper Chosun Ilbo, in its May 9 editorial, criticized the advocacy group for “shifting its focus from ‘solving problems’ to ‘keeping problems’ at a certain point and pursuing narrow interests.”

“The organization has hitch-hiked on anti-Japan incendiarism driven by political purposes. Therefore, it has been criticized for making it even harder to solve the problems,” the editorial said.

News media have reported the organization’s financial statements from 2018 included spending of 33.39 million won (2.91 million yen, or $27,200 at current exchange rates) in donation money at a beer hall.

Other reports said the group’s financial records have raised suspicions that donations and resources were misused to cover the costs of having Yoon’s daughter study in the United States.

In addition, doubts have been cast over the criteria used to select candidates for the organization’s scholarship programs.

The group has defended its actions, saying, for example, that the beer hall-related spending “included expenses other than drinking and eating.”

It also insisted that its records were compiled in line with standards set by the National Tax Service.

The organization said that compensation money from a wrongful conviction case involving Yoon’s husband and other funds covered the costs of the U.S. studies of Yoon’s daughter.

The group held its 1,439th weekly rally on May 13 near the Japanese Embassy.

“The organization did not commit personal embezzlement nor illegal siphoning of money. Never,” Lee Na-young, current head of the organization, said at the rally.

At the same time, Lee said the organization “made some little mistakes” in its accounting-related documents.

“Although we have been audited by lawyers and public accountants every year, we will examine the ways the donation money is used and make sure there is no illegal embezzlement,” she said.

Lee also railed against the news media, saying that reports on the organization’s scandal were made “with malicious intent to end the comfort women issue.”

“It is a repression of the women’s movement,” Lee said.

The rally drew many supporters, including ruling party-affiliated female lawmakers.

But there was also dissent, with some participants shouting angrily, “Stop the Wednesday demonstration.”