EDITORIAL: Virus strategy needed even after lifting of state of emergency 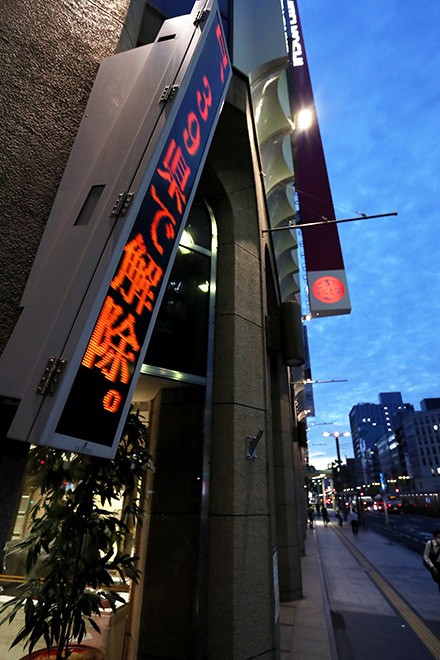 An electronic sign in Hiroshima shows the news that the state of emergency was lifted in 39 prefectures on May 14. (The Asahi Shimbun)

The government lifted a state of emergency aimed at stemming the spread of the new coronavirus in 39 of the nation's 47 prefectures on May 14.

The decision is welcome in that society is moving to return to normalcy.

But there are also reasons to hesitate to genuinely celebrate the development.

The latest decision is marred by the problems seen in a series of government responses to the pandemic, such as insufficient explanations to the public and a lack of transparency.

A state of emergency gives the central and local governments the special power to restrict citizens’ freedom and rights. The process of either imposing or removing the measure must be free from any political motives.

Such decisions should be cool-headed and objective ones based on solid science.

But explanations about the decision given by government officials have been mostly haphazard and often inconsistent comments.

Even areas where there had been no or few confirmed cases of infection were covered by the nationwide state of emergency under the pretext of restricting the flow of people across prefectural borders during the holiday-studded Golden Week, which began in late April and ran through May 6.

The government then decided on May 4 to extend the measure beyond the original expiration date of May 6.

But the measure was lifted for much of the nation before its overall effects became clear.

Yasutoshi Nishimura, the state minister in charge of economic revitalization who also oversees the government handling of the novel coronavirus outbreak, promised to develop specific criteria for terminating the situation. But all he has offered is one criterion: that new confirmed cases fell to 0.5 or lower per 100,000 people during the past week.

Experts have pointed out that the government has no good feel for how widespread the infection is in the population. The current state of affairs raises serious questions about the wisdom of depending solely on this indicator in deciding whether to lift the state of emergency.

Many other questions remain unanswered with regard to the decision. What kind of data has the government used to assess the status of polymerase chain reaction (PCR) tests and medical capabilities in each prefecture in deciding to end the state of emergency there, for instance?

Some countries use the so-called effective reproduction number--the number of people that one infected person will pass the virus on to, on average--as one of the key indicators for easing lockdowns.

The government should not be criticized for feeling its way through this unprecedented crisis. But it should offer detailed and convincing answers to questions about its responses to the situation posed by citizens.

To strike a good balance between trying to contain the outbreak and keeping the economy afloat, it is vital to ensure that the people have accurate understandings of what is happening and what the government is trying to do.

The Abe administration needs to keep this imperative in mind especially because it has failed to fulfill its responsibility to answer questions about various scandals and issues.

There have been an alarming number of reports about how loosening restrictions has led to a resurgence of coronavirus infections in other parts of the world.

That also happened in Hokkaido. Even prefectures where the state of emergency has been lifted should not be lulled into thinking that they can now lower their guards.

In some areas, even a slight increase in the number of COVID-19 patients could threaten to overtax the local medical system. Local governments need to continue their efforts to secure sufficient facilities and materials to treat patients who need hospital care.

It is assumed that there will be many small waves of infections in the future. The question is how much of social activities should be restricted, depending on the scale of infections.

To answer this question, it is crucial to assess the effectiveness of measures local governments have taken. Their experiences should be widely shared to prepare for what is to come.

The government has a responsibility for mapping out a strategy for a prolonged battle against the virus, which could last for years, while swiftly implementing urgently needed measures.