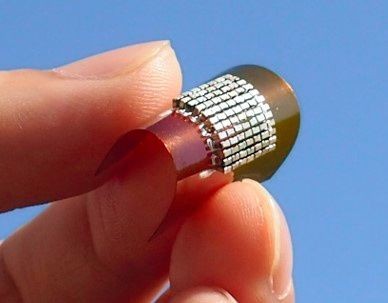 A researcher in Osaka Prefecture has developed a wearable material that generates electricity from excess human body heat using tiny sensors that can be stuck on the skin like a small bandage.

When a sheet of the thin, flexible material is tightly adhered to the body or other heat sources, the temperature difference between the sheet's front and back enables it to start producing power.

Each semiconductor measures 0.5 millimeter by 0.5 mm wide and 1 mm high.

The material produces power if its temperature reaches the same level as that of human skin.

Though each semiconductor chip can produce only a small amount of electricity, arranging many of them on a small space is thought to produce a significantly large electromotive force.

Though his converter’s power generation capacity needs to be further boosted before commercial application, Sugahara said he has high expectations for his invention.

“The product can be made at a lower cost because existing techniques of semiconductor processing and manufacturing can be used,” Sugahara said.

Materials that generate power based on the skin's warmth have already been introduced for wristwatches and other products. Sugahara is looking to develop one that can be utilized as the power source for a wide range of sensors.

In the emerging internet of things (IoT) era, where a myriad of sensors are embedded in all sorts of places from home appliances and automobiles to streets and manufacturing facilities, data from sensors is expected to be collected through the internet for analysis by artificial intelligence under the pretext of making life more convenient.

Determining how to secure power sources must be overcome to achieve that goal.

If the vast number of sensors have to be connected to batteries or electric wires, replacing and installing them would require a huge amount of labor. Solar cells appear to be a simpler solution, but they have the downside of being unable to charge when night falls.

Sugahara believes his thermoelectric generating material can easily supply electricity to places that are difficult to be powered by other means.

The technology is expected to be used for monitoring chemical plants, computerized data centers and other infrastructure facilities by operating sensors there on excess heat from equipment to predict mechanical failures in reference to collected vibration and temperature data.