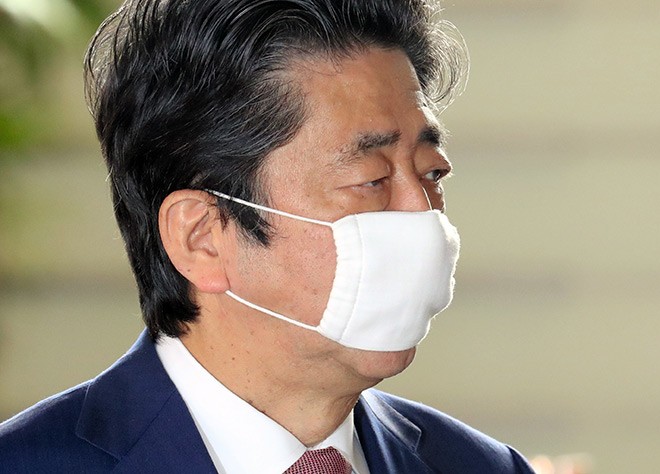 Shinzo Abe arrives at the prime minister's office wearing a cloth mask on May 15. (Takeshi Iwashita)

Prime Minister Shinzo Abe's much-derided emergency care package of face masks for every household to mitigate the effects of the new coronavirus pandemic is in tatters after tens of thousands of defective items sent to expectant mothers were returned by local governments.

What no doubt was initially intended as a thoughtful gesture, which cynics dubbed “Abenomask” as a ploy to improve the Abe administration's approval ratings, has left the government with an additional 800 million yen ($7.46 million) bill to inspect all the returned items on top of the 46.6 billion yen it earmarked for the project.

Of approximately 470,000 cloth masks for pregnant women delivered as of the end of April, around 10 percent, or 47,000, were judged to be defective or discolored, prompting local governments to ship them back to the sender.

The health ministry on May 14 insisted that the program be continued by redelivering masks in pristine condition.

A ministry official told an Upper House committee meeting discussing the matter that the government had commissioned specialists to do the work and about 550 people were involved in carrying out inspections.

“If we find a defective product, it will be removed,” the official said after the ministry revealed the hefty sum to put things right through quality checks.

During the committee meeting, Mizuho Fukushima, head of the Social Democratic Party, asked for a progress report on how 23.3 billion yen allocated from the fiscal 2020 supplementary budget to deliver a pair of cloth masks to every household had been spent to date.

The health ministry revealed it has yet to complete contractual procedures with one of the three companies that it chose to place orders for delivering face masks.

The government had planned to deliver all of the masks by the end of May. But that now seems very unrealistic, Fukushima reminded the ministry officials.

“You have delivered only 4 to 5 percent of all masks so far,” Fukushima said. “Why don’t you just give it up?”

To cover the cloth mask project, the government allocated 23.3 billion yen from a fiscal 2020 reserve fund as well as the same amount from the supplementary budget.

Eventually, 130 million or so masks are supposed to be delivered to households across the nation.

“We will do the right thing based on the purpose of the budget,” a top official said.